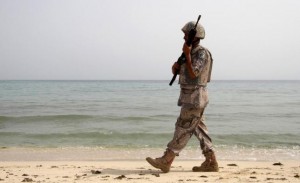 Saudi-led forces have hit a Yemeni Houthi rebel’s militia boats, Sunday, after the insurgent’s forces had attacked a civilian logistics ship on a humanitarian voyage in the Red Sea.

Houthi forces had attacked an Australian-built high-speed logistics catamaran under lease to the United Arab Emirates military, near the Bab al-Mandab strait off Yemen’s southern coast on Saturday. However, civilians and crew escaped unharmed.

According to the Saudi-led coalition the vessel – which was owned by the UAE Marine Dredging Company – was:

The Saudi-led coalition went on to call the Houthis terrorists. However, the Houthis denied that their forces had been hit and said that, instead, a UAE military vessel had been destroyed. The – Houthi dominated – Saba Yemeni news agency said: