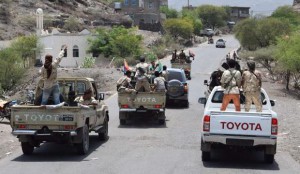 Forces belonging to the anti-Houthi coalition led by Saudi Arabia have entered the Houthis’ northern stronghold Saada, according to Yemeni military sources.

Speaking on condition of anonymity, the sources said ground troops from the ten-country-strong coalition were now present in tribal areas on the outskirts of Saada, which lies roughly 140 miles (230 kilometers) north of the capital Sana’a.

They said the assault comes as part of a three-pronged operation to liberate Sana’a, which along with other areas in the country has been under Houthi control since September 2014.

The operation will see coalition ground troops backed by air cover, the Yemeni army, and volunteer forces loyal to Yemen’s internationally recognized government, surround and enter Sana’a via Saada to the north and the Al-Jawf and Ma’rib provinces—which lie roughly 75 miles (120 kilometers) northeast and 124 miles (200 kilometers) east of the capital respectively.

Once Saada, Al-Jawf, and Ma’rib are wrested from Houthi control, coalition, Yemeni volunteer, and Yemeni army forces will enter the capital, the sources said.

Coalition forces including those from Saudi Arabia and the United Arab Emirates have had a presence in the southern port city of Aden since its liberation by government loyalists from the Houthis last month.

But there have been no ground operations by coalition forces until now, with the Saudi-led coalition only providing air and logistical support for pro-government Yemeni forces on the ground.

Sources told Asharq Al-Awsat however that ground troops from the coalition have been arriving in Ma’rib for the last five days in order to commence a ground operation.

They say the forces are backed by tanks, military vehicles, and Apache helicopters.

The sources also said that “fierce battles” had already commenced between coalition forces, the Yemeni army, and government loyalists on one side, and the Houthis and their allies on the other for control of the mountainous regions lying between Ma’rib and Sana’a.

Other sources speaking to Asharq Al-Awsat meanwhile said they expected “a major battle” in Saada in the coming days. The northern province is the Houthis’ traditional stronghold and is home to the group’s leadership including Abdul Malik Al-Houthi.