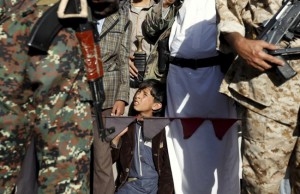 A military coalition led by Saudi Arabia fighting to restore legitimacy in Yemen announced in a statement on Monday it had completed a prisoner swap in Yemen, exchanging nine Saudi prisoners for 109 Yemeni nationals ahead of a planned truce and peace talks aimed at ending the year-long war with Houthi rebels.

A coalition statement carried by the state-run Saudi Press Agency said Saudi Arabia received its nationals on Sunday, but it did not did not say which group the deal was made with. It said the Yemenis held had been detained in “areas of operations near the border of Saudi Arabia.”

The alliance “hopes to begin a truce in conflict areas of the Republic of Yemen,” it added.

The exchange comes as the Saudi-led coalition and Yemeni rebels, known as Houthis, have agreed to a cease-fire at midnight on April 10 ahead of peace talks starting April 18 in Kuwait.

Several prisoner swaps took place between the two sides since late last year. The Iran-allied Houthi movement said on Sunday it had exchanged prisoners with Riyadh, as a first step towards ending a humanitarian crisis in the Arab world’s poorest country prompted by the conflict.

In its statement, the coalition said it hoped the tentative calm now in Yemen would allow “aid to reach all Yemeni territories” and would support United Nations’ efforts to end the fighting following two rounds of failed talks last year.

News site Yemen Now published a photo of a group of smiling, waving men in white robes and keffiyeh head scarves, which it said was of the soldiers. Reuters was not immediately able to verify the image.

The main battle between the Houthis and the Yemeni government backed by the coalition has led to a power vacuum in parts of the country, allowing al Qaeda and ISIS-linked fighters to take advantage.

A powerful al-Qaida affiliate has seized a large swath of territory across the country’s south and east, while an upstart ISIS branch has carried out a series of attacks.

Air raids killed 14 men suspected of belonging to al Qaeda in southern Yemen on Sunday, medics and local residents said, in one of the largest U.S.-led assaults on the group since a civil war broke out a year ago.

The U.S., while pulling out advisers from Yemen as the civil war there ramped up, has continued its drone strike program targeting its local al-Qaida affiliate, which Washington believes to be the most-dangerous branch of the terror organization.

The fighting has took the lives of more than 6,000 people, left millions displaced and pushed to the brink of famine.