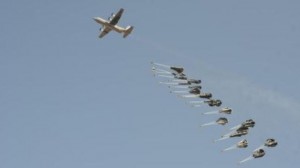 Warplanes from the Saudi-led coalition waging a military campaign against Houthi militias in Yemen dropped arms supplies by parachute on Friday to fighters defending central Aden from the Shi’ite Muslim group, the local fighters said to Reuters.

The light weapons, telecommunications equipment and rocket-propelled grenades were dropped over Tawahi, a district on the far end of Aden peninsula which is still held by fighters loyal to President Abd-Rabbu Mansour Hadi, they said.

The pro-Hadi newspaper Aden al-Ghad published pictures of at least one wooden crate atttached to a parachute, which the newspaper said had landed in Aden. Local men were seen loading the crates onto pickup trucks.

The Iran-allied Houthis and their supporters swept into the heart of Aden on Thursday despite more than a week of air strikes by the Saudi-led coalition which has sought to stem their advance and ultimately return Hadi to power.

Aden is the last major stronghold of fighters loyal to Hadi, who fled the city eight days ago and has been watching from neighbouring Saudi Arabia as his remaining power crumbles in the face of the Houthi gains.