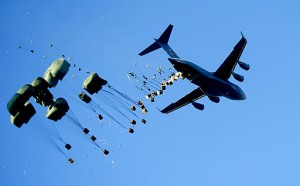 Coalition planes “parachuted three shipments of arms and ammunition to help our fighters in southwest Taez,” a source told, adding they included RPG launchers and a variety of weapons.

The airdrop took place before dawn on Tuesday and Wednesday, he said.

Clashes raged today in Taez between the rebels and fighters allied with President Abedrabbo Mansour Hadi, another military source said.

The Houthis overran the capital Sanaa in September 2014 and went on to seize control of several regions, aided by forces loyal to ousted president Ali Abdullah Saleh.

A Saudi-led Arab coalition launched an air campaign against the rebels in late March, in support of Hadi who fled to Riyadh.

It carried out a fresh wave of air strikes Wednesday on Taez, as fierce fighting raged on the ground in the city which has remained in the hands of fighters loyal to Hadi.

In the evening, coalition warplanes bombed rebel positions in the west and south of Taez, according to a military source.

A main target in the evening was the headquarters of the 35th Brigade, near the central prison and a strategic hill overlooking a residential area.

Meanwhile, in Yemen’s second city Aden suspected Islamists set off a sound bomb in the courtyard of a university building, causing panic among students, witnesses said.

It came after radical Islamists who support the Islamic State group had issued a threat this week to target academic institutions.