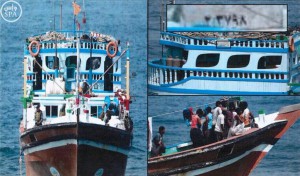 A Saudi-led military coalition supporting Yemen’s government said that it had seized an Iranian boat loaded with weapons bound for Houthi rebels.

The boat was intercepted in the Arabian Sea off Oman’s southern city of Salalah and 14 sailors on board were detained, the alliance said in a statement.

Documents found in the boat showed it was registered for fishing under an Iranian national’s name, the statement said.

The Iranian Foreign Ministry, in comments reported by the official Islamic Republic News Agency, said the coalition’s claims were “baseless.”

Wednesday’s announcement came amid growing tensions between Saudi Arabia and its regional rival.

Tehran has accused Saudi Arabia of mishandling this year’s annual haj pilgrimage, in which 769 pilgrims died in a stampede last week.

Iran said at least 239 of its pilgrims were killed in the crush, the pilgrimage’s worst accident in 25 years.