You are here: Home / MidEastGulf / Saudi-led airstrikes in Yemen intensify as rebels fire back 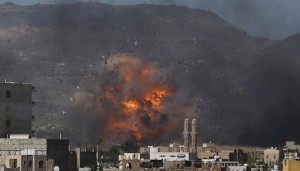 The officials said Wednesday the airstrikes targeted rebel positions in Sanaa, including those at the presidential palace and the airport. They say at least 20 Houthis have been killed in the strikes since Tuesday. The officials, who are independent in the conflict that has torn Yemen apart, spoke on condition of anonymity in line with regulations.

Meanwhile, tribal officials in the Houthi stronghold of Saada in northern Yemen, which borders Saudi Arabia, say rebels have been launching rockets into Saudi Arabia.

They say this has stepped up since a truce ended last Saturday. The officials spoke on condition of anonymity because they are not authorized to talk to reporters.