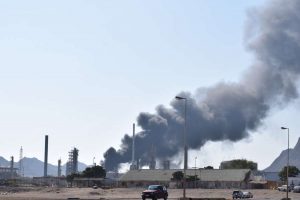 A coalition led by Saudi Arabia launched at least 15 airstrikes on the Yemeni capital of Sanaa held by the Shia Houthi rebels amid escalating tensions despite the looming threat posed by the coronavirus pandemic, like reported by asianlite.com.

The Houthis’ al-Masira television channel reported that a man was killed and two others injured in the attacks on monday, reports Efe news.

Another strike targeted the al-Hodeida province located on the Red Sea, with no casualties reported.

Six attacks targeted a military academy in al-Rawdha outskirt north of the city, and three others hit a military site in the northwestern outskirts, Efe news has verified.

The coalition’s warplanes also attacked al-Dailami airbase which is adjacent to Sanaa airport north of the capital and other sites in the area.

The Saudi-led coalition, which has intervened in the Yemen war since 2015, announced a “military operation” to “neutralize and destroy legitimate military targets” of the Houthi rebels.

The attacks came as “precautionary measures to protect the civilians from any collateral damage”, the coalition added.

Months after tense calm in Sanaa, the Iran-backed Houthi on Sunday launched two missiles on Riyadh and the border province of Jizan.

Last week, the Houthis and the internationally recognized government led by President Abd Rabu Mansur Hadi welcomed calls by the UN for a “global ceasefire” amid the coronavirus pandemic.

The calls came on the occasion of the fifth anniversary of the coalition’s intervention.

Yemen has not yet reported any coronavirus cases, according to the World Health Organization.

The country would be unable to handle a health crisis of this magnitude, while the Houthi rebels have asked for international aid to help fight the COVID-19 pandemic.