You are here: Home / MidEastGulf / Saudi forces deployed in Yemen’s port of Aden 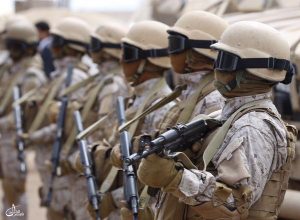 Yemeni security officials say Saudi forces have arrived in the southern port city of Aden amid friction within the kingdom-led alliance there, like reported by ap.org.

The officials say the troops were deployed on Friday at the presidential palace, port, and airport. They spoke on condition of anonymity because they weren’t authorized to talk to journalists.

They are the first special Saudi forces in Aden since a Saudi-led coalition in 2015 started fighting Shiite Houthi rebels to restore Yemeni President Abed-Rabbo Mansour Hadi’s internationally recognized government. After the Houthis overran the capital, Sanaa, the government became based in Aden as its temporary capital.

In Aden, Hadi’s government has continued to face multiple challenges, including recent friction with another member of the Saudi-led alliance, the United Arab Emirates. UAE forces are also based in Aden.