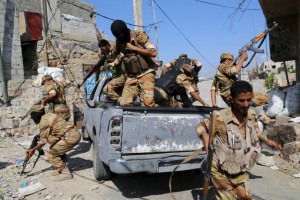 After ten months of bitter fighting in Yemen, a seven-day ceasefire is set to begin Monday midnight, local time. In the lead-up to the temporary UN-brokered truce, the main combatants — Iran-backed Shiite Houthi rebels and the Saudi Arabia-led coalition loyal to internationally-backed Yemeni President Abed Rabbo Mansour Hadi — have stepped up their fighting.

Houthi rebels launched a Russian-made Tochka short-range ballistic missile at coalition forces Monday, according to the Houthi-controlled SABA News Agency. The report stated that at least 146 coalition forces and other anti-Houthi fighters were killed in the attack in Taiz, the southern city of Yemen that has been under fire from both sides for months.

Asset Source, a mobile intelligence and monitoring company, reported between 16 and 18 Sudanese, 23 Saudi, seven Emirati, and nine Moroccan soldiers were killed in the attack. The Houthi report also claimed that at least 40 mercenaries from the U.S. security services training company formerly known as Blackwater Worldwide, now called Academi, were among the fatalities.

International Business Times was not able to independently confirm the numbers, but Saudi Arabia’s state-run news agency reported that a Saudi Colonel and officer from the United Arab Emirates were killed in Taiz Monday “while carrying out their duties in … liberating Taiz.”

The lethal Tochka missile, a Soviet-era ballistic missile that also goes by the NATO reporting name SS-21 Scarab, was also the weapon of choice when Houthis launched an attack at a coalition-controlled base in September, killing at least 45 Emirati troops, five Bahrainis and 10 Saudis — the deadliest operation against coalition forces until now.

Houthis have access to roughly 40 Tochka missiles, according to a recent interview with an official from Iran-backed Lebanese militant group Hezbollah. The official told IBT that Houthis have access to former Yemeni President Ali Abdullah Saleh’s weapons cache. It was not immediately clear whether the missile used on Monday was part of this stockpile or a recent acquisition.

In the Yemeni capital of Sanaa, coalition airstrikes Sunday killed 12 people and wounded at least 20 others, including women and children, according to the pan-Arab TV channel Al-Mayadeen. In a separate attack, the coalition launched at least 11 airstrikes in the northwestern province of Hajjah and a further 25 people were killed in aerial strikes between Saturday and Sunday morning.

Asset Source reported that intensified fighting is typical in the hours preceding a ceasefire in order to “solidify and improve their positions ahead of truces in order to have more bargaining power in talks. Such an intensification should be expected until the hour of the truce’s implementation.”

Neither the Saudi Arabia-led coalition nor the Houthi rebels have guaranteed that they will respect the ceasefire. The halt in fighting is based on an agreement between internationally-backed president Hadi and United Nations’ envoy Ismail Ould Cheikh Ahmed. Peace talks are set to follow Tuesday.

Mueen Abdulmalek, a member of the government delegation, told AFP, “We hope the militias will commit to the ceasefire this time.” A spokesman for the Houthis said the group would only respect the truce if the coalition and forces loyal to Hadi halted their “aggression.”