You are here: Home / MidEastGulf / Saudi Clerics call for jihad against Assad, Russia, and Iran 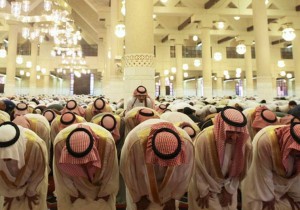 A sizable group of Saudi clerics has called for jihad against the regime of Bashar Assad in Syria, and by extension, Assad’s military allies Russia and Iran. The Islamist clerics praised the rebels Russia is currently bombing as “holy warriors of Syria” who are “defending the whole Islamic nation.”

“Trust them and support them,” the statement from the Saudi clerics warned, “because if they are defeated, God forbid, it will be the turn of one Sunni country after another.”

Bashar Assad is a member of a Shiite sect, the Alawites, while Iran is a Shiite theocracy. This declaration of sectarian war from the Sunni Islamists of Saudi Arabia puts them uncomfortably close to a de facto alliance with ISIS and al-Qaeda, which are officially opposed by the Saudi government and its clerics, but often portray themselves as the defenders of Sunni Muslims against Shiite oppression.

Reuters notes that the letter from these opposition Saudi clerics “also portrayed Russian involvement as part of an Orthodox Christian crusade, and attacked the West for denying the rebels anti-aircraft weapons.”

The “Western-Russian” coalition with Shiite Iran and Assad’s Alawites was blasted by the clerics for “making a real war against the Sunni people and their countries.”