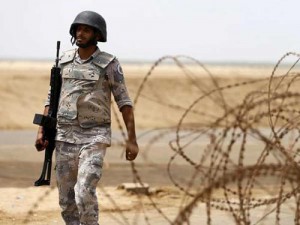 Two Saudi border guards have been killed and five others wounded by shellfire on the frontier with Yemen, official media reported.

The deaths occurred when “military missiles from Yemen” struck their position at Zahran South in the Asir border region Wednesday, Riyadh’s interior ministry said in a statement carried by the official Saudi Press Agency.

The two dead guards bring to at least 30 the number of people, military and civilian, killed in the Saudi border area since a Riyadh-led coalition began airstrikes against Iran-backed Shiite Houthi rebels in Yemen in late March.

Coalition warplanes have been bombing Houthis and their allies in support of pro-government forces in Yemen.

The air campaign led to deadly skirmishes between the rebels and Saudi forces along the border, but many of the recent Saudi casualties have been civilians killed by cross-border barrages.

Inside Yemen, weeks of fighting between pro- and anti-government forces have killed almost 2,000 people and displaced more than half a million, according to the United Nations.