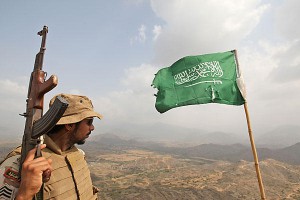 The Saudi-led multinational coalition faces a difficult and challenging mission in Yemen. In the southern port city of Aden, forces loyal to embattled President Abd Rabboh Mansour Hadi are all but cornered. The militant al-Houthis have been extremely successful in rapidly expanding their sphere of influence, seizing Sanaa and Taiz, Yemen’s two largest cities. Alarmed by the continued advances of the al-Houthi movement, which is bolstered by military forces loyal to former President Ali Abdullah Saleh, Saudi Arabia and its allies launched an air campaign March 26. Having mustered over 100 combat aircraft and around 150,000 ground personnel, Riyadh intends to support and restore what it perceives to be the legitimate government of Yemen’s president. At the very least, Saudi Arabia wants to prevent the al-Houthis from consolidating control over the core of Yemen.

Riyadh has several courses of action it can pursue to maximize its influence in Yemen, the most extreme of which is invading with a large ground force. Before making any decisions, however, the Saudis will have to weigh the benefits of such an operation while considering the inevitable risks.

Continued Saudi air attacks risk inciting additional unrest in Yemen. The collateral damage and civilian casualties that airstrikes almost inevitably cause will galvanize opinion against Riyadh. In retaliation, the al-Houthis could carry out cross-border attacks or even use long-range Scud ballistic missiles seized from the Yemeni armed forces.

The Saudis, however, are unlikely to be easily deterred and are not without options. Riyadh has the advantage of ample fiscal reserves that will sustain the campaign against the al-Houthis. The Saudis can use these funds to improve Hadi and his supporters’ positions in Yemen and to buy influence with tribal factions throughout the country, a tool Saudi Arabia has used in the past. In particular, funding the Sunni tribes in key energy-rich areas of Marib province will help them better repel the al-Houthis. Riyadh’s wealth also gives it leverage over the al-Houthi militant factions, which will not be able to run the country without the substantial aid that comes from Saudi Arabia. However, the al-Houthis could secure other financial backers, a prospect that concerns the Saudis.

In addition to money, the Saudi air force is a powerful weapon in its own right. From the advent of the first Gulf War and increasingly since the drawdown from the second, Riyadh has invested hundreds of billions of dollars in its military, and the Saudis have consistently purchased some of the latest equipment, including advanced missiles and guided munitions for their aircraft. While the Saudi air force still faces significant limitations — namely its dependence on foreign contractors for maintenance, the varied and uneven quality of its pilots and its insufficient intelligence, surveillance and reconnaissance capabilities — it is still more than capable of securing the skies over Yemen and projecting force over long distances at tolerable risk.

In addition to the air campaign, the Saudi-led multinational coalition initiated a naval operation focused on blockading Yemen’s ports and securing the Bab al-Mandeb Strait. Egypt and Pakistan allegedly sent vessels to assist Saudi naval elements in the area. Blockading Yemen from the sea while Saudi Arabia imposes a no-fly zone will allow the coalition partners to isolate Saleh and the al-Houthis from external material support. Yet the air campaign and the naval blockade will not be enough. Current military operations will severely constrain the al-Houthis, but if Saudi Arabia seeks decisive victory, it will need to deploy ground forces.

While Saudi, Egyptian and other coalition officials have alluded to a potential ground intervention, it is important to consider the different forms it could take. The coalition could deploy small teams of special operations forces to work alongside indigenous tribal factions or Hadi’s forces. Or, if fully committed, there could be an all-out conventional operation with heavy armor that requires significant logistics. While Saudi Arabia would like to maintain the smallest possible footprint in Yemen that enables it to still achieve its objectives against the al-Houthis, Hadi’s forces appear severely distressed, and a large ground incursion may be necessary if certain conditions are met.