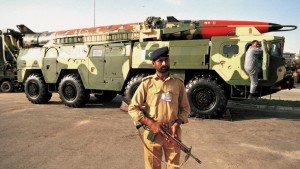 Saudi Arabia has reportedly held talks with Pakistan for the purchase of nuclear weapons amid the ongoing nuclear negotiations between world powers and Iran, according to a US senior official who spoke with The Sunday Times.

Tensions in the region have escalated in light of the framework agreement the United States and the other world powers have made with the Islamic Republic, with Saudi Arabia increasingly concerned with the repercussions of a deal that may see the easing of sanctions leaving Iran more legroom to continue developing weapons of mass destruction.

The strain in relations was evident when  Saudi Arabia’s King Salman skipped a major summit in Washington this week, along with the leaders of three other Gulf nations.

“For the Saudis the moment has come,” The Sunday Times quoted a former US defense official as saying.

“There has been a long-standing agreement in place with the Pakistanis and the House of Saud has now made the strategic decision to move forward.”

Saudi Arabia is skeptical that any final, comprehensive deal with Iran will curb its nuclear ambitions, with the West’s engagement  having actually “opened the door to nuclear proliferation,” a military source told The Sunday Times.

According to one senior British official who also spoke with The Sunday Times, military leadership from all Western countries “assume the Saudis have made the decision to go nuclear.”

“The fear is that other Middle Eastern powers — Turkey and Egypt — may feel compelled to do the same and we will see a new, even more dangerous, arms race.”