You are here: Home / MidEastGulf / Saudi Arabia, UAE, Qatar and Jordan may send 90,000 military in Iraq to fight IS 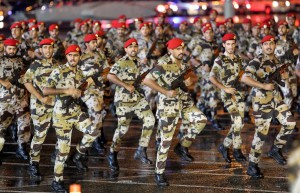 Around 100,000 foreign military, including 90,000 from Arab countries, may be deployed to Iraq to fight against the Islamic State (IS) terrorist organization, Iraq Press Agency quoted politician Hanan Al Faltawi as saying.

Al Fatlawi said that she received this information from reliable sources after talks between US Senator John McCain and Iraqi Prime Minister Haider al-Abadi. The meeting took place on November 27 in the joint American-Iraqi operational headquarters in Baghdad that coordinates military actions against IS, she added.

“Foreign forces of 100,000 – 90,000 from Saudi Arabia, the United Arab Emirates, Qatar and Jordan and 10,000 from the United States – will be stationed in Iraq’s western parts,” Al Fatlawi noted. The politician added that “the Iraqi prime minister openly expressed bewilderment over McCain’s statement but was told that everything had already been decided.”

The Islamic State is an extremist organization banned in Russia. In 2013-2014, it called itself the Islamic State of Iraq and the Levant (ISIL). In June 2014, IS announce the establishment of the “Islamic caliphate” on the territories seized in Iraq and Syria. According to US’ Central Intelligence Agency, the extremist group includes around 30,000 people, while Iraqi authorities claim there are around 200,000 in IS. Among members of the group are citizens of 80 countries, including France, Great Britain, Germany, Morocco, Saudi Arabia, US, Canada, as well as Russia and other CIS countries. According to reports, militants now control around 40% of the Iraqi territory and 50% of the Syrian territory.