You are here: Home / Africa / Saudi Arabia tops list of anti-terrorism donors for the Sahel 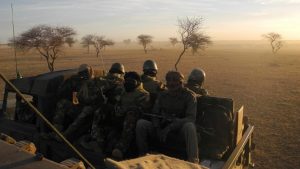 French President Emmanuel Macron hosted an international meeting in Paris on Wednesday to discuss means to provide political, military and financial support to the African Common Force, which was formed earlier this year to combat terrorism in the Sahel, like reported by aawsat.com.

The summit achieved remarkable results, with Saudi Arabia pledging 100 million Euros to the joint force, becoming the largest state to finance terrorism in the Sahel, while the UAE promised 30 million Euros and Washington had already announced aid of up to USD 60 million.

Participants included leaders of the African countries that form the joint force known as the G5S (Burkina Faso, Chad, Mali, Mauritania and Niger), as well as Macron, German Chancellor Angela Merkel, the prime ministers of Belgium and Italy, Saudi Foreign Minister Adel Al-Jubeir, as well as representatives of the UAE, United States, the United Nations and African and European countries.

The summit discussed the situation in Mali, where the parties have so far failed to implement the peace agreement reached after the French military intervention in this country with the help of Algeria. The latter did not attend the summit, as the French president did not succeed to convince Algerian officials during his visit to Algers last week to participate in the meeting of La Celle-Saint-Cloud.

“We must win the war against terrorism in the Sahel-Sahara region,” Macron told reporters after meeting with the five countries’ presidents and other leaders including Merkel.

“There are attacks every day. There are states which are currently in jeopardy,” he added.

A summit in Brussels in February is set to focus on raising more cash to provide further security to the African Continent.

“We cannot wait. We need to start leading the fight as soon as possible,” the German Chancellor said after Wednesday’s meeting. “This is an urgent task,” she added.