You are here: Home / MidEastGulf / Saudi Arabia to send planes to Turkey for ISIL fight 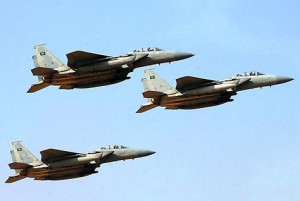 Saudi Arabia will send aircraft to NATO-member Turkey’s Incirlik air base for the fight against ISIL militants in Syria, Turkish Foreign Minister Mevlut Cavusoglu was reported as saying on Saturday.

Saudi Arabia has resumed its participation in air strikes against ISIL in recent weeks and US Defense Secretary Ash Carter on Thursday welcomed its commitment to expand its role.

“Saudi Arabia is now sending planes to Turkey, to Incirlik. They came and carried out inspections at the base,” Cavusoglu told the Yeni Safak newspaper, adding it was unclear how many planes would come and that the Saudis might also send soldiers.

Saudi officials could not immediately be reached for comment on Cavusoglu’s remarks.