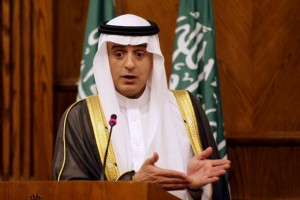 Saudi Arabia has called for Syrian President Bashar al-Assad to either step down or face military action, raising the stakes in the complex geopolitical scenario in the region further. Speaking in New York, Saudi Foreign Minister Adel al-Jubeir has made it clear that there is no future for Assad in Syria.

Saudi Arabia’s position has been explicitly expressed at a time when Russia is deploying its forces in support of the embattled Syrian leader. Dismissing Russia’s call for a regional cooperation against the Islamic State (Isis), without disturbing the Syrian regime, Jubeir said it is a “non-starter”.

After concluding his talks with Saudi allies at the UN General Assembly, Jubeir told reporters: “There is no future for Assad in Syria. There are two options for a settlement in Syria. One option is a political process where there would be a transitional council. The other option is a military option, which also would end with the removal of Bashar al-Assad from power.”

Jubeir, the foreign minister of the regional Sunni powerhouse, admitted that military invasion “could be a more lengthy process and a more destructive process but the choice is entirely that of Bashar al-Assad”. He refused to divulge any specifics when asked about the planned response of the West and its anti-Assad partners in the region to Russia’s military build-up. He said: “Whatever we may or may not do we’re not talking about” but immediately added, “There is a Free Syrian Army that is fighting against Bashar al-Assad.”

He went on: “There is a moderate Syrian opposition that is fighting against Bashar al-Assad and this opposition is getting support from a number of countries. And we expect that this support will continue and intensify.”

He also heaped scorn on Iran, the regional Shiite-inclined rival of the Saudi Kingdom and a staunch support of the Damascus regime, saying that Tehran is an “occupying power” looking to capitalise on the conflict. Shooting down the argument that the Sunni Kingdom is involved in a regional race with Shiite Iran, the Saudi foreign minister continued: “We’ve been living in the Middle East all our lives. We’re not the ones meddling in the affairs of other countries. The Iranians are. So you should look at it as Iranian aggression against other countries in the region.”