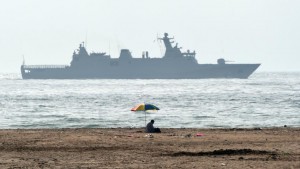 Saudi Arabia conducted naval war manoeuvres in the Gulf, Strait of Hormuz and the Sea of Oman, the world’s most important oil corridor.

The war games, said Rear Admiral Majed bin Hazza’a Al-Qahtani, quoted by SPA, were aimed at preparing those involved for “the protection of the marine interests of the Kingdom of Saudi Arabia against any possible aggression.”

The exhibition of strength comes amidst heightened tensions between Saudi Arabia and regional rival Iran.

At loggerheads over ongoing conflicts in Syria and Iran, tensions between the two states have been on the rise in 2016.

In May, Tehran banned Iranian citizens from travelling to Saudi Arabia to perform Hajj following disagreements regarding a stampede at last year’s pilgrimage which cost the lives of 2,000 pilgrims – including 464 Iranians.

This development followed on from Saudi Arabia’s execution of Shia cleric Nimr al-Nimr in January and the consequent ransacking of two of the kingdom’s diplomatic missions in Iran which led the two countries to break diplomatic ties.

In recent weeks Iran too has sought to show off its military might and latest hardware holding, in late September, in a series of public displays exhibiting thousands of missiles, warplanes, tanks, and troops in different areas of the country.

These included displays in the Gulf on September 21st during which 500 Iranian patrol boats and warships took place in a large maritime display, and Russian-made Sukhoi Su-22 fighter jets flew over the Iranian-Gulf port of Bandar Abbas, in their first public appearance since their purchase from Moscow.

Tehran has received sharp rebukes from Washington over its activities in the Strait of Hormuz in recent months, including for one incident in September when the US Navy claimed that Iran threatened a missile strike against two US maritime patrol vehicles in international airspace over the Strait of Hormuz.