Saudi Arabia sends a letter to the United Nations and international aid groups advising them to remove staff from areas of Yemen under Houthi control. 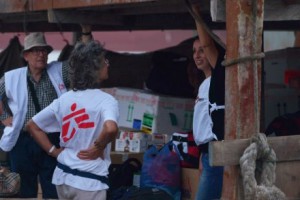 Saudi Arabia has sent a letter to the United Nations and international aid groups advising them to remove staff from areas of Yemen under Houthi control.

The Saudi Embassy in London sent the short note, saying the warning’s intention was to “protect the international organizations and their employees”.

It was not immediately clear how many aid groups received the note.

Saudi Arabia leads a coalition of nine Arab countries that began a military campaign in March to prevent Houthi rebels, whom it sees as a proxy for Iran, from taking complete control of Yemen.

UN aid chief Stephen O’Brien said in a letter on Sunday that he had received the note but said the humanitarian community would continue to deliver aid across Yemen impartially on the basis of need.

The Saudi mission to the United Nations responded that Riyadh would “do its utmost to continue to facilitate and support” humanitarian aid work in Yemen, but repeated its request for UN and international aid workers to leave areas close to Houthi bases in order for military operations to go ahead.

“The coalition’s request is consistent with its obligations under international humanitarian law and, in no way, can be misinterpreted to indicate any hindrance to humanitarian access and the delivery of humanitarian assistance in Yemen,” it said.

The UN Security Council is due to discuss the humanitarian situation in Yemen on Tuesday at the request of Russia, diplomats said.

The Houthis and their allies, forces loyal to former Yemeni President Ali Abdullah Saleh, accuse the coalition of launching a war of aggression.

Nearly 6,000 people have been killed since the coalition entered the conflict in March, almost half of them civilians.