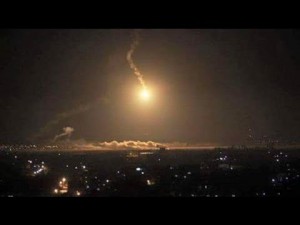 The Scud was allegedly fired at the southwestern city of Khamis Mushait near the Saudi Arabia-Yemen border. Two missiles launched from a Saudi Patriot missile battery intercepted the ballistic missile before hitting its target.

No casualties were reported.

“Immediately, the air forces of the alliance destroyed the rocket launcher whose location was identified south of Saada,” a statement from the command of the joint forces said, SPA reported.

The official press agency added that Houthi rebels and forces loyal to former President Ali Abdullah Saleh were to blame for the attack, which was launched from the rebel-held area of Saada.

In April, Saudi Brigadier General Ahmed al-Assiri, spokesman for the Saudi-led coalition, noted that the Houthis military “capabilities” had been destroyed in the airstrikes, with an emphasis on Scud missiles, the AP news agency reported.

“As coalition forces, we confirm that all Houthi capabilities were targeted, foremost their ballistic missiles,” Assiri said.

The incident follows months of Saudi-led airstrikes against Houthi positions in Yemen, which began March 26.

The military campaign has left more than 1,000 civilians dead and a million displaced, Stephane Dujarric, spokesman for the UN Secretary-General, told reporters on Wednesday.

The talks aim to rekindle a ceasefire between Houthi rebels and the Saudi-led coalition in order to increase much needed humanitarian aid to the country.

The US State Department revealed that it had held talks with Houthi leaders at the end of May to “reinforce” a political solution to the crisis in Yemen, which the UN has called “catastrophic.”