You are here: Home / MidEastGulf / Saudi Arabia forecast to be next regime to implode 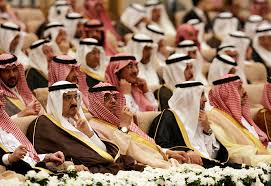 The results of the “Arab Spring” have been inconsistent. The BBC reports Egypt ended up back under military control, there’s complete chaos in Libya, Bashar al-Assad still runs Syria and the Islamic State has actually suffered defeat in some locations.
Rulers were changed in Yemen and Tunisia too, and there were uprisings or protests in Bahrain, Algeria, Jordan, Kuwait, Morocco and Sudan, as well as minor outbreaks in a handful of other countries.

Now Saudi Arabia may be up next, according to a report in Joseph Farah’s G2 Bulletin.

Even Russia, which sees the kingdom as playing a central role in containing the Islamist threat of al-Qaida and the Islamic State inside the country, is having doubts about its value.

A Russian official told G2Bulletin that Moscow has extensive issues with Riyadh but still wants to keep its relations with Riyadh because of its influence over the Arab countries over which the Kremlin seeks to extend its own influence.

This assessment comes despite the Saudi family and other private Saudis continuing to help finance and send arms to the jihadi fighters inside Syria where the Saudi government would like to install a Sunni-led regime.

On that score, the Russian, who insisted on anonymity, said Moscow has serious differences with Riyadh, although Moscow’s political goal is to work toward a transition Syrian government in 18 months through a United Nations-backed conference to convene later this month.

In turn, the Saudis have serious problems with the Russians, given their backing of the embattled Assad government which is allied with the Saudi kingdom’s arch nemesis, Shiite Iran.

The dispute with Russia is so serious that a month ago the Saudi Wahhabi religious authorities there, who enjoy wide support throughout the Sunni portion of the Saudi kingdom, including the Saudi royal family, issued a fatwa for a jihad against Russia.

Despite that edict, the Saudi elite see a need to continue working with the Russians given their clear military superiority in the region even though Russia’s attacks are on groups the Saudis back, namely the Islamic State, Jabhat al-Nusra, Ahrar al-Sham and Jaysh al-Islam.

The Russian source said Moscow views them as “jihadi Salafists,” terrorist groups which it is targeting with its intensive air attacks.

“The Al Saud will collapse in the near future if it keeps on its sectarian policies in the region,” warned Brig. Gen. Hossein Salami, lieutenant commander of the Islamic Revolutionary Guard Corps, or IRGC.
Al Saud refers to the Al Saud royal family that governs the Saudi kingdom.

“The Saudi rulers will be buried under the avalanche that they have created,” he said, adding that Riyadh’s actions will produce a “domino effect” of other Shiite communities rising up against their Sunni monarchy rulers.

The Iranian intelligence minister, Seyed Mahmoud Alavi, was more emphatic. In a message, he said the Saudi regime “will be toppled soon.”

“By adopting terroristic and inhuman policies, the Al Saud regime will not achieve enhanced security. On the contrary,” Alavi said, “it will face imminent downfall.”