You are here: Home / MidEastGulf / Saudi Arabia fights the Islamic State at home 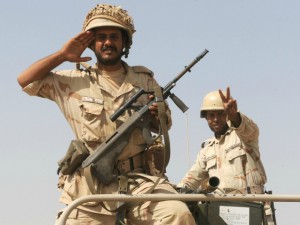 Saudi Arabia is facing a serious domestic problem with the Islamic State. The government recently announced that it had arrested 431 individuals for crimes associated with the Islamic State, with some arrests dating back to last November, but most occurring within recent months. For perspective, between 2002 and 2014, an average of 28 Americans have been arrested annually on terrorism charges, with the highest number being 58 in 2009. The year 2015 will likely exceed the 2009 total, but will still pale in comparison to the high volume of recent Saudi arrests.

From police shootings to suicide bombings of mosques and, most recently, of a maximum security prison in Riyadh, the Saudi-based cells of the Islamic State are conducting attacks, or trying to, at a high tempo. They have moved beyond the inspirational and organizational stage to the operational. The large number of arrests is less a sign of indiscriminate mass sweeps and arrests than a sign that the Kingdom is facing its greatest internal terror threat since the height of al-Qaeda in 2003-2004—a time that included the Khobar massacre that left 22 people dead, most of whom were foreign nationals working in the oil sector.

With a history of attacks on vital soft targets, Saudi Arabia is extremely sensitive to threats of violent instability. Highly dependent on foreign nationals in important sectors such as energy and information technology, Saudi officials have moved to disrupt existing cells and existing plots. In order to preempt future cells and plots, the government has also cracked down on Islamic State social media supporters, who help spread the group’s message and encourage more recruits. Facing both physical and virtual threats, the Saudi government will continue its crackdown on the group for the foreseeable future.

Saudi Arabian nationals play an outsized role in the Islamic State’s suicide operations in Iraq and Syria, accounting for the largest percentage of suicide attackers. This is the continuation of a trend that has held steady since the days of al-Qaeda in Iraq (AQI), the predecessor to the Islamic State’s current manifestation of bin Ladinism. The June suicide bombing of a Shi’a mosque in Kuwait, which killed 27 people, was conducted by a Saudi national named Fahed Suleiman Abdulmohsen al-Gabbaa. Most worrisome, al-Gabbaa had no previous connections or associations with terrorism. Saudi officials are quite concerned that there may be more such individuals who have escaped detection. While trying to limit the travel of extremists, the Saudi government is more concerned about the possible supporters who choose not to travel and instead become operational at home.

These stay-at-home extremists are much harder to detect—not just for Saudi Arabia, but for any country. Traditional counterterrorism tripwires, like travel and international communication, are bypassed when local cells are inspired to act at home. Recent attacks and thwarted attacks, which included more planned assassinations, mosque bombings, and even an attack on an unspecified diplomatic mission, indicate that the internal threat is far more serious than the external threats that are dominating the country’s attention, such as Yemen. As Saudi Arabia remains a prime target and many of its citizens answer the Islamic State’s call to terror, the threat will continue.