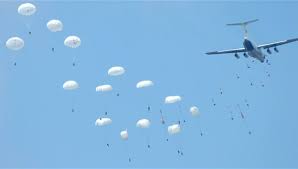 Local media said late on Monday that Saudi aircraft airdropped the paratroopers as well as arms cargos to the port city of Aden and parts of neighboring Ad Dali’ Province.

The development came days after an unnamed Saudi official confirmed that Saudi special forces are involved in the kingdom’s aggression against Yemen.

He said on Saturday that the Saudi army and naval special forces have carried out specific operations in Yemen.

The official said that the army and naval special forces have provided the militants in Yemen with “coordination and guidance” against popular committees.

Saudi Arabia’s military aggression against Yemen started on March 26 in a bid to restore power to fugitive Hadi. The airstrikes have killed hundreds of people and injured thousands more.

Ansarullah fighters have taken over state matters, citing the inability of Hadi’s former government to properly run the affairs of the country and contain terror and corruption.

In February, Hadi fled the capital, Sana’a, to the southern city of Aden, where he sought to set up a rival base. Hadi had stepped down in January and refused to reconsider the decision despite calls by Houthi revolutionaries. The then parliament, however, rejected his resignation, which he later withdrew in Aden.

Popular committees backed by Ansarullah fighters are continuing their advances despite the Saudi attacks while also stepping up their fight against al-Qaeda terrorists and secured many areas from the militants.