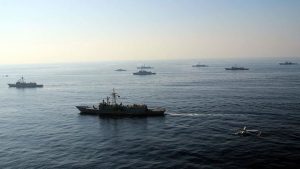 According to SPA the Royal Navy of the Kingdom of Saudi Arabia, represented by the Special Forces of the Western Fleet in Jeddah, and its counterpart of the Chinese People’s Navy took part in the exercise.

The drill is scheduled to last three weeks at the King Faisal Naval Base in Jeddah.

The exercise aims at “building mutual trust, enhancing cooperation between the Saudi Royal Navy and the Chinese People’s Navy, and exchanging and developing experiences in the field of maritime terrorism and piracy,” SPA added.

Over the past few months, the number of joint military drills in the region has been on the rise amid fears of possible conflicts.