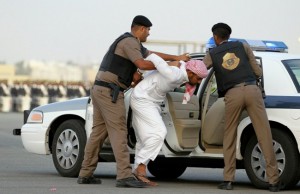 Saudi Arabia has arrested 93 people suspected of belonging to the Sunni Muslim militant group ISIS, including at least 65 Saudi nationals, the interior ministry said in a statement carried on the official Saudi Press Agency Tuesday.

The kingdom and some other Sunni Gulf monarchies have taken part in U.S.-led airstrikes against the group in Syria.