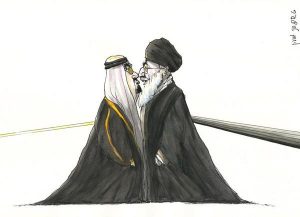 In a resolution long on criticism but short on concrete steps, Arab foreign ministers who convened in Cairo Sunday delivered a tirade of criticism against Iran and its Lebanese proxy Hezbollah, warning that Tehran is destabilizing the region.

The emergency meeting was convened at the request of Saudi Arabia, with support from the United Arab Emirates, Bahrain and Kuwait, to discuss means of confronting Iran’s regional interventions, like reported by israelhayom.com.

They said they were planning to “brief” the U.N. Security Council on Iran’s destabilizing policies in the region, particularly its support for Shiite rebels in Yemen, and planning to submit an anti-Iran Arab resolution at a later stage.

In what is perhaps the only concrete measure to emerge from the emergency meeting, the ministers said Arab telecommunications satellites would ban Iranian-financed television stations. The reason for the ban, they said, was that the networks exacerbate sectarian and ethnic tensions and pose a threat to Arab security.

“We are not declaring war on Iran at this stage,” Arab League chief Ahmed Aboul-Gheit said. “We have not taken a decision to ask the Security Council to meet, but we are just briefing the council and maybe the next stage will be for us to meet and call for a Security Council meeting and submit a draft Arab resolution [against Iran].”

Lebanon, where Hezbollah is a key member of the coalition government, and Iraq, a majority Shiite nation bound by close political and religious ties to Iran, voiced reservations about the harsher parts of the resolution, including one branding Hezbollah a “terrorist” organization. The draft also blamed the Shiite group for supporting “terrorist groups” across the region and supplying them with weapons, including ballistic missiles.

Hezbollah, both a military force involved in Syria’s war and a political movement, is part of a Lebanese government made up of rival factions.

While not mentioning Iran by name, he said Lebanon condemned all attacks against Arab nations, but blamed exploitable inter-Arab divisions that allowed international and regional powers to promote their interests.

Lebanese Prime Minister Saad Hariri, a Saudi ally, resigned from the premiership on Nov. 4 in a surprise announcement in Riyadh, in which he accused Iran and Hezbollah of spreading strife. Subsequently, Lebanese President Michel Aoun and other politicians accused Saudi Arabia of coercing Hariri to resign and holding him hostage, an allegation denied by both Saudi Arabia and Hariri.

Saudi Arabia, a Sunni powerhouse, has significantly sharpened its anti-Iran rhetoric since intercepting a ballistic missile fired by Iranian-backed Shiite rebels in Yemen on Nov. 4. According to the Saudi Defense Ministry, the missile was intercepted over Riyadh’s international airport. The Saudis said the missile was Iranian-made and declared the attack an act of war by the Iranians.

Iran denies arming the Yemeni rebels, known as Houthis, who say they produced the missile locally.

“Showing leniency toward Iran will not leave any Arab capital safe from those ballistic missiles,” he told the Arab foreign ministers’ meeting.

“Today we must take a serious and honest stand … to counter these belligerent policies,” he said.

He said his country had been targeted by a total of 80 ballistic missiles fired by Yemen’s Shiite rebels since 2015, when the kingdom formed and led a coalition to fight the rebels in Yemen alongside forces loyal to the internationally recognized government there.

Saudi Arabia will not stand idly by in the face of Iran’s “blatant aggression,” Al-Jubeir told the assembly, adding, “We must stand together.”

Aboul-Gheit also spoke during the session, which was broadcast live. The Arab League chief was just as critical of Iran as the Saudi minister. Alluding to the Nov. 4 attack, he said it delivered a message to Arab nations that their capitals were within the range of Iranian missiles.

“We say it in clear terms that Iranian threats have exceeded all boundaries and are pushing the region toward the abyss. … [Iran’s] missile program poses a danger to the region,” Aboul-Gheit said.

According to the final statement, the ministers said they supported any action to be taken by Saudi Arabia to protect its national security, within the boundaries of international legitimacy.

Bahrain’s foreign minister, Sheikh Khalid Bin Ahmed Al Khalifa, urged strong action by the Arab League against Iran. In the absence of such support, his country would have no choice but to rely on the protection of its Western allies, he said, citing the U.S. 5th Fleet headquartered in Bahrain and naval ships patrolling the Persian Gulf.

Meanwhile, Iranian Foreign Minister Mohammad Javad Zarif accused the Saudis of sowing division. On the sidelines of a meeting in Antalya, Turkey, Zarif told Iranian state media, “Unfortunately, countries like the Saudi regime are pursuing divisions and creating differences, and because of this they don’t see any results other than divisions.”

On Sunday, U.S. Secretary of State Rex Tillerson called Egyptian Foreign Minister Sameh Shoukry to discuss, among other things, regional tensions over Lebanon, the foreign ministry said in a statement.