You are here: Home / Analysis / Saudi Arabia and Iran’s rivalry is key to the Middle East in 2018

Regional chaos is set to continue with no solution in sight to Yemen crisis and power struggle over shape of post-war Syria, like reported by theguardian.com 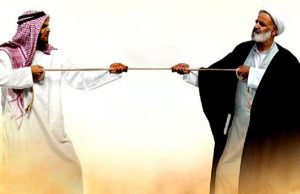 Another turbulent year in the Middle East has drawn to a close, but there will be no respite in 2018 from the regional chaos that is underpinned by the inflamed rivalry of Saudi Arabia and Iran.

The young crown prince Mohammed bin Salman has consolidated power, embarking on an unprecedented cultural revolution and economic reforms in Riyadh, but his foreign policy ambitions have yet to bear fruit. Instead they will continue to sap lives and resources in neighbouring Yemen, the Arab world’s poorest country, unless a political settlement is reached.

That possibility appears farther away now with the death of Sana’a’s longtime strongman and president for 30 years Ali Abdullah Saleh, whose killing at the hands of Houthi rebels leaves the country with no clear end to the conflict. Saudi Arabia accuses Iran of backing the Houthis.

Iran has its own domestic challenges to contend with. Hundreds of people have been arrested and at least 21 killed in the biggest challenge to the Islamic Republic’s ruling clerics in recent years, in a week of protests that began against rising prices and developed into broader demands for political change.

In Syria, Prince Salman will have less say in how the war will turn out as the country lurches towards a political settlement with Bashar al-Assad’s regime, backed by Moscow and Tehran, retaining the military momentum. The opposition is scattered, its rebels eclipsed by the local al-Qaida affiliate or owing their existence to backers in Turkey, and the politicians are in exile and out of touch with people on the ground.

Russia, Iran and Turkey hold the reins and will decide the shape of a final deal, though there is no guarantee it end the violence or the rebellion against Assad. As global and regional powers look to a post-war Syria, the jockeying will begin for a slice of the reconstruction projects in the country.

It is there, also, that the fate of Kurdish aspirations for autonomy or statehood will be decided. Syria’s Kurds have proven a valuable ally to the US-led coalition fighting Islamic State, but now that campaign is nearly over and the military aid will come to a halt. The Kurds say they want autonomy, but their opponents in Syria see their westward expansion in the north as an attempt to carve out a state.

Whatever those ambitions, they have run up against Turkey’s strenuous objections that the Kurdish militias fighting in Syria are a national security threat, and it is likely Washington and Moscow will ultimately side with Ankara.

Turkey watchers will keep an eye on the ongoing deterioration in human rights and curtailing of freedom of speech as President Recep Tayyip Erdoğan strengthens his grip on power and further marginalises the opposition before presidential and parliamentary elections slated for 2019. Those may yet be brought forward, though the government strongly denies any such suggestion.

The crackdown is likely to be accompanied by further conflict as fault lines continue to emerge over Turkey’s identity, and secularists and Islamists wage that battle through public debate on social media. The secularists’ anxiety will be fuelled by Turkey’s drift away from its traditional allies in America and Europe, a result of mutual antagonism and Turkey’s strategic divergence from the west and its Nato allies.

In Iraq, the focus will be on rebuilding the country after a gruelling, years-long campaign to oust Isis from its strongholds. But Baghdad faces a monumental task in bringing a scarred nation together, with the Kurds smarting from the defeat of their independence bid, and many Sunnis who lived in Isis-controlled areas desperate for their homes to be rebuilt and for their communities to play a role in post-war Iraq.

The central government will have to balance those aspirations with reigning in the Iranian-backed Shia militias that played a key role in the campaign but have been found guilty of atrocities and whose influence protects them from accountability.

Despite the defeat of Isis, terrorism remains a key challenge in the region. Though the terrorist group has lost vast tracts of territory in Iraq and Syria, its fighters are returning to their insurgent roots in desert hideouts, as the group contemplates its next move.

In Egypt, where elections are due to be held in 2018, Isis has sought to exploit the vacuum in Sinai and the incompetence of the government in Cairo to sow chaos, and it has continued launching solo terrorist attacks around the world.

Though beaten militarily, the conditions that fomented the rise of the world’s most brutal terrorist organisation remain in place in the region, from authoritarian rulers to disenfranchisement of communities, sectarian tensions, displacement, power vacuums, inequality and economic desperation.