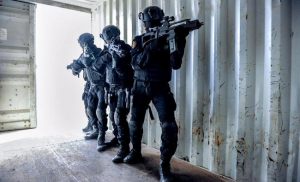 Two Daesh terrorists were shot dead and another blew himself up in three separate raids by Saudi security forces in the national capital, the Presidency of State Security said according to arabnews.com.

In a statement, the agency said five other militants were also captured and that the Daesh cell had been dismantled during the simultaneous raids on three suspected terror hideouts in preemptive operations that aimed to prevent Daesh-linked plots.

The first, in Al-Rimal neighborhood in city’s north, contained a factory for making suicide belts and explosive devices. One terror suspect at the site refused to surrender to security forces and blew himself up.

The second location was an apartment in the Namar neighborhood, where an armed terrorist refused to surrender to security forces, firing shots at them, and was eventually killed. No civilian casualties were reported at the site.

The third location was a stable for horses in the Al-Hair district south of Riyadh, which was thought to be used by terrorists for meetings and criminal activities. Five suspected terrorists from this cell were captured, but their identities were not released for security reasons. Two Kalashnikov assault rifles, ammunition, chemical materials used for the preparation of explosives, and other objects were seized.

Forensic evidence teams have started investigations at the three sites.