You are here: Home / MidEastGulf / Saudi and Chinese troops dance to the same tune 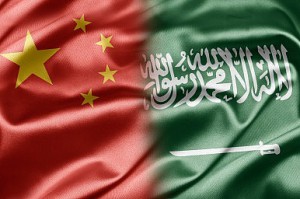 A viral video of Saudi and Chinese troops dancing together has been circulated widely online, shining a light on apparently friendly relations between the two countries.

The video was filmed at the end of a joint training exercise between Saudi and China, according to local website Gulf Eyes. The troops are seen laughing and singing together as they perform a traditional dance under the flags of the two countries and a banner in both Arabic and English.

Saudi website Asharq al Awsat reported that the 15-day joint training exercise took place in the Chinese city of Chengdu. Both Saudi and Chinese troops exchanged experiences in specialized areas such as hostage training, tough weather situations and difficult geographic areas – work that was part of an extended military cooperation between them.

The clip could not be independently verified by Al Bawaba. But the jovial routine could be a reflection of warming relations between China and Saudi Arabia.

A friendship between the two has warmed this year, thanks in part to efforts by Deputy Crown Prince Mohammed bin Salman to move the Saudi economy away from its reliance on oil. It’s meant working to attract investment from strong economic powers, and in August Saudi tentatively confirmed partnerships in fields including housing, technology and culture by signing 15 preliminary deals with China.

In January Chinese President Xi Jinping travelled to Saudi for the first time since taking power – and even took part in a traditional Saudi dance during his two-day visit, according to Al Arabiya.