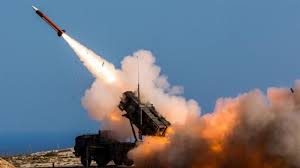 Homes in the Saudi capital shook and there were at least six loud blasts, bright flashes in the sky and puffs of smoke above the city. There were no reports of casualties.

The Iran-backed rebels’ news outlet Al-Masirah boasted that the missiles had struck the Saudi defense ministry and other sites in the capital.

But Col. Turki Al-Maliki, spokesman for the Saudi-led coalition fighting the rebels, denied that the defense ministry had been hit.

The attacks were the latest in a series of missile launches targeting densely populated residential areas of Saudi Arabia, including Riyadh and the southern cities of Jazan and Najran, close to the border with Yemen.
The latest missile attack on Riyadh has brought new urgency to the military operation by forces from the Saudi-led coalition in Yemen to capture the Red Sea port city of Hodeidah.
Hodeidah port is a lifeline for humanitarian aid to Yemen, but it is also a conduit for the supply of Iranian weapons to the Houthis, including missiles fired at Saudi Arabia.
The coalition has produced evidence to show that, as well as arms and ammunition, Tehran illegally smuggles missile parts to the Houthis through the port. They are then reassembled and launched at Saudi cities from sites in northern Yemen.
A coalition military operation began two weeks ago to dislodge the Houthis from Hodeidah and halt the supply of weapons and missile parts.
On Sunday, coalition forces moved closer to the city center.
There was fierce fighting near Hodeidah University, about 3 km west of the city center, on the coastal road linking the city’s airport to the port.
Coalition forces took control of the airport last week and have been consolidating their hold in the area as UN efforts continued to reach a political deal that would avert a full military assault on the port.
Capturing Hodeidah would allow the coalition to cut the supply line to the Houthis in the capital, Sanaa, and the militias are devoting all their resources to retaining control.
“There is a heavy deployment of armed Houthis in the city and new check points have been set up in neighborhoods where there are supporters of the Tehama brigades,” said one resident. The Tehama are a Yemeni faction from the Red Sea coastal plain who are fighting with coalition forces to restore Yemen’s legitimate government.
The coalition has pledged a swift military operation to take over the airport and seaport without entering the city center, to minimize civilian casualties and maintain the flow of goods.
Some civilians have been injured or made homeless in the fighting. The medical charity Medecins Sans Frontieres has received 151 injured people in recent days at Al-Thawrah Hospital, the main public medical facility serving Hodeidah, and expects to receive more as the fighting moves toward the city.
“There are 86 beds in Al-Thawrah and we desperately need more. We hope to set up a field hospital with 20 beds in the next two weeks,” said Caroline Seguin, the charity’s program manager for Yemen.
“The battle for Hodeidah is reaching the point of no return,” the International Crisis Group said in a conflict alert.
“This is the final, fragile moment in which it may still be possible for UN-led negotiations to prevent a destructive fight.”