The aim is to halt the advance of 5,000 extremists who have seized more than a dozen major oil fields, boosting their war coffers. 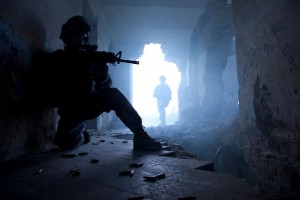 SAS troops are in Libya preparing for the arrival of around 1,000 British infantrymen to be sent against ISIS there in early 2016.

Special Forces including military close observation experts from the Special Reconnaissance Regiment are spearheading a major coalition offensive against the terror network.

The operation will involve around 6,000 American and European soldiers and marines – led by Italian

forces and supported mainly by Britain and France.

It comes in a bid to stop the advance of around 5,000 Islamic extremists, who have already secured more than a dozen major-oilfields to swell their war chest of millions of dollars.

The new Libyan ISIS stronghold is the coastal city of Sirte, where depraved fighters have launched their

trademark regime of rape and murder against civilians.

They have even ordered local parents to offer up their daughters to sex-crazed gunmen who want young girls – all in the name of their twisted jihad, or holy war.

Islamic State are planning to advance on Libya’s prize oil refinery at Marsa al Brega , the biggest in north Africa, which sits between Sirte and Benghazi.

Success would give them control of all of the country’s oil and boost sales of their ‘black market oil business’ which is funding their war-mongering and making them the richest terror group ever.

SAS troops are working alongside Libyan military commanders to advise them on what western forces term ‘battle-space management’ – how to control the battlefield using troops, tanks, warplanes and navy ships.

They are also collecting intelligence and ‘atmospherics’ on the ground to send a ‘situational assessment’ back to London for the Chief of Joint Operations, Lt Gen John Lorimer.

It is thought he may then ask the RAF to send more warplanes to Cyprus to join our ten Tornados and six Typhoons currently bombing ISIS in Syria and Iraq.

A Royal Navy destroyer has been directed to the North African coast and the RAF has been asked to prepare for air-strikes against IS targets in Libya.

Control of Libya is confused and complicated since Gaddafi’s government was deposed, in the West the official government in exile sits in Tripoli while in the East opposition forces are based in the East at Benghazi and Tobruk.

In the areas between al-Qaeda fighters and criminal gangs fright for power and both face the might of Islamic State who are mounting a savage assault along the coastline in its bid to extend their power base.

Foreign Office officials have been in discussions with Coalition partners for months and defence secretary Michael Fallon has indicated that 1,000 British troops may be sent to help train Libyan forces.

Last month US fighter aircraft conducted an airstrike in which they killed a senior IS commander in Libya named as Abu Nabil, aka Wissam Najm Abd Zubaydi.

Since then politicians from Italy, France, the Uk and United States have agreed to mount an offensive in support of the Libyan government which will commence within weeks.

A senior military source said : “This Coalition will provide a wide range of resources from surveillance, to strike operations against Islamic State who have made significant progress in Libya.

“We have an advance force on the ground who will make an assessment of the situation and identify where attacks should be made and highlight the threats to our forces”.