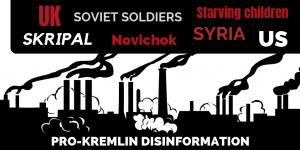 Ridicule and accuse, recycle and amplify. This was the strategy behind the pro-Kremlin disinformation campaign’s immediate efforts when the UK released the images of the two suspects of the Salisbury nerve gas attack, like reported by euvsdisinfo.eu.

Polluting the information space – and readers’ thinking – by spreading clusters of contradicting and misleading messages aims at distracting the audiences from the facts. But this week it was also winning time and preparing the ground for Russia’s president Vladimir Putin’s statement that Russia has identified the suspects.

And here is how the pro-Kremlin disinformation campaign looked like in action this week:

First, the pro-Kremlin disinformation campaign started ridiculing the evidence provided by the UK. It claimed that the security camera footage of the two suspects arriving at Gatwick Airport on March 2, 2018, shows them in the same place at the same time. It further accused the UK of fabricating the evidence and ridiculed it stating that the UK is practising “God-level trolling” and that the Russian Military Intelligence agents must have “learned to walk in tandem while appearing separately in two different photos”.

But in fact, after passengers clear passport control and customs at Gatwick, they are obliged to walk separately through a row of identical barriers. Furthermore, the suspects were clearly filmed in different corridors.

Then it was time for detailed claims aimed at creating further confusion, like that Novichok was too toxic to be carried in a perfume bottle (debunked by the scientist who developed the substance) and that Sergei and Yulia Skripal never could have touched the poisoned door handle (debunked here). Disinformation also repeated the unsubstantiated claim that Novichok could have been manufactured in the UK. See the debunk here.

Finally, the pro-Kremlin disinformation avoided any remarks on Russia’s responsibility and spread conspiracies that it was the UK who attempted to poison the Skripals: that it was an anti-Russian provocation  and hysteria  by the UK secret services to distract attention from Brexit, to set the EU against Russia and to weaken Russia’s economy.

If in April Russia’s disinformation stories on the Salisbury attack managed to contaminate the information space and two out of three articles on the Skripal case shared on Facebook, Twitter, LinkedIn, or Pinterest, came from Kremlin-funded media outlets, this time the immediate impact of disinformation was much more limited. Even in a brief phone poll on Russian Govorit Moskva Radio Station, over half the callers said they believe Russia was behind the nerve agent poisonings in Britain.

Who is keeping silent?

When a topic is too painful the pro-Kremlin disinformation campaign prefers to ignore it. In Russia, the local election day on September 9 was “one of the calmest in recent years”, we learned from the Russian police.  At the same time, the state-controlled Russian TV channels were carefully silent about the country-wide protests and clashes between the protesters and the police with hundreds detained.

The Russian TV told its audience a different breaking news story: Two million kids starve in Britain! and it is the UK “propaganda” that “hushes up” this problem. In fact Russian TV must have learned about the so called holiday hunger from one of the many reports in the UK media.

We also saw a culmination of a disinformation story that started spreading in 2016: that Finns would have organised mass shootings of Soviet Soldiers in Sandarmokh, Karelia, during WWII. The claim is tailored to distract the attention from the thousands victims of Stalin’s terror who in fact were executed and buried in Sandarmokh. The same technique has been in use before in relation to the Katyn massacre. Freshen your mind from disinformation pollution with this debunk.