You are here: Home / Africa / Sahrawi Army “ready” to take up arms again if Morocco continues to disregard international law 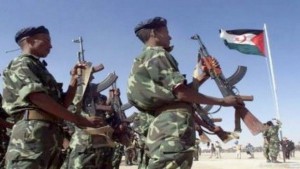 He, however, underlined that the decision to take up arms again “lies with the Sahrawi President, Mohamed Abdelaziz,” adding that “Sahrawis are peaceful people who aspire to regain their independence through negotiations and the holding of a referendum on self-determination.”

The Sahrawi Defence minister also denounced “Morocco’s continuous violation of human rights in the occupied territories of Western Sahara, as well as the sending of weapons and radars to the Kingdom of Morocco by some ally countries in order to end any legitimate resistance of Sahrawi people.”

He said that “contrary to what have been reported by Moroccan media, the Sahrawi military forces are carrying out their duty of protecting citizens in the Sahrawi liberated territories and refugee camps, as well as towards the international delegations on mission to Western Sahara.”

Buhali also denounced “Morocco’s colonial policy aiming at creating tensions between Maghreb countries while flooding them with drugs with a view to destabilizing the region.”