You are here: Home / Analysis / Sahel region have to deny safe havens to Islamic militants 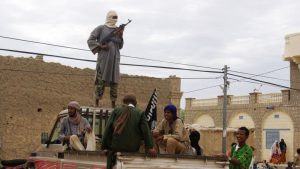 Islamic State is spreading its influence to other regions, including Africa’s Sahel, and experts are warning that countries in the region should take measures to keep the militant groups from regrouping in these areas, like reported by voanews.com.

Having lost most of the territory it once controlled in Iraq and Syria, the terror group’s fighters are reportedly establishing ties with local militant organizations.

“A key strength of these extremist organizations has been their ability to move with ease across national borders within the Sahel, allowing them to regroup after setbacks, and to replenish their ranks with inflows of fighters, weaponry and resources,” Jennifer G. Cooke of George Washington University’s Elliott School of International Affairs told VOA.

Officials in the Sahel region have also voiced concerns over growing militancy and warned that the militant groups are not only destabilizing the region, but also pose a threat to the security of other countries.

“Most of these terrorists are leaving these places to come to the Sahel, to harbor there and to organize attacks against everybody.” Abdoulaye Diop, Mali’s foreign minister, said during a discussion at the Washington-based Center for Strategic and International Studies (CSIS) late last year.

“There is legitimate concern that if allowed to, the extremist groups will make themselves into a direct threat to the U.S. and its friends by turning the region into a new Afghanistan, where the Taliban gave al-Qaida the freedom to organize the terrorist attacks of Sept. 11, 2001.”

In order to crack down on militant groups in the region, five countries including Niger, Chad, Mali, Burkina Faso and Mauritania established a joint force known as the G5, which is a 5,000-person military and police force, tasked with carrying out counterterrorism operations along the common border regions of all five countries.

However, the G5 Sahel is not yet fully operational due to funding and logistical issues.

On Tuesday, while on a visit to Mali, the country most affected by terrorism among the G5, U.N. Secretary-General Antonio Guterres appealed to donors to provide more sustainable support to the G5 Sahel force.

“The international community must understand the need to provide the G5 Sahel countries with predictable support,” Guterres said.

In February, various countries pledged $509 million to G5, just shy of the group’s initial budget of $529 million, but the contributions have not been made yet.

Some analysts, like George Washington University’s Cooke, warn that the G5 must pull its act together to ensure that international partners do no lose interest.

“The force has won initial support from European partners, the United States, Saudi Arabia and others, all of whom have been convinced of the need for a greater regional security cooperation,” Cooke said. “If operationalization of the joint force becomes bogged down in disagreements or delays, international partners will very likely lose interest.”

Some experts charge that the military option is not the only answer to the problem of extremism in the region.

“Equally important, however, will be to use U.S. diplomatic and development leverage to press governments of the region to think beyond the military and address not just the symptoms, but the drivers of violence and insecurity as well,” Cooke said.

“The answer is some combination of longer-term economic and political development paired with steady progress on the part of the member nations’ security force,” Shurkin said. “It’s about opportunities as well as about integrating marginalized populations.”

A U.S military spokesperson told VOA that they are coordinating with G5 on the ground.

Samantha Reho, spokesperson for the U.S. Africa Command, said that last month, several military officers from G5 Force participated in the annual Flintlock Exercise, organized by the U.S. Special Forces Command in cooperation with nations across the Sahel. Flintlock is designed to foster regional cooperation to stabilize regions of North and West Africa, and reduce the presence of violent extremist organizations.

Reho added that the G5 Force is a new initiative and that there is no determination yet as to how the U.S. will support it.

“But what I can tell you is that any direct support we provide will be [in] conjunction and in coordination with those respective host nations and other U.N. and international partners, mainly France’s 4,000 troops, who have had a long-standing military presence in the region,” said Reho.

Shurkin of the Rand Corporation believes that working with the French in the Sahel will be a good idea.

“The U.S. can help the G5 force be more effective, working in tandem with the French, not in isolation from the French,” he said.