You are here: Home / MidEastGulf / Saddam’s former army is secret of Baghdadi’s success 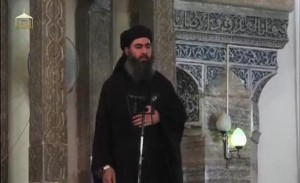 Abu Bakr al-Baghdadi at a mosque in the centre of Iraq’s second city, Mosul, according to a video recording posted on the Internet on July 5, 2014, in this still image taken from video. REUTERS/Social Media Website via Reuters TV

A year after declaring his caliphate, it is clear that the secret of Abu Bakr al-Baghdadi’s success is the army and state he has built from the remnants of Saddam Hussein’s military, and the allegiance he has won or coerced from alienated Sunni Muslims in Iraq, Syria, and beyond.

In that year, the self-appointed caliph has expanded his turf from eastern Syria and western Iraq to include adherents in pockets of war-racked Libya and Egypt’s lawless Sinai peninsula.

He has set his sights on Saudi Arabia, birthplace of Islam, and his Islamic State has launched an online magazine for Turks, who have volunteered for his jihad in hundreds if not thousands.

His speeches, freighted with Koranic verses ripped from their context and loaded with hadith – sayings attributed to the prophet, many regarded as spurious – sound more like sermons.

The recruiting drum he beats is loud and clear: summoning his followers to a pitiless jihad against Shi’ite heretics, Christian crusaders, Jewish infidels, and Kurdish atheists. He berates Arab despots for defiling the honour of Sunni Islam.

His message is this: Where Iraq’s rulers could not prevent the 2003 U.S.-led invasion that delivered the country into the hands of Shi’ites, and were unwilling to mount a jihad against Alawite minority rule in Syria, much less deliver Jerusalem from Israel, Islamic State will now lead the way.

In this pseudo-religious and sectarian narrative, the IS jihadis are on a divine mission to redeem a fallen Arab world by fire and the sword – as shown in its videos of beheadings and immolations.

Other factors are critical to IS success. Beyond the alliance of Saddam loyalists and Islamist extremists born of the Iraq war, Baghdadi relies on local Sunnis and their tribes, whereas his jihadi precursors relied more on foreign fighters.

Despite thousands of foreign volunteers, jihadist ideologues say IS forces are 90 percent Iraqi and 70 percent Syrian in its two main strongholds, where they have about 40,000 fighters and 60,000 supporters.

Baghdadi, who forged links with Saddam’s Baathists while a prisoner during the U.S. occupation, also claims descent from the Prophet Mohammad and his Quraishi tribe – a heritage that allows him to assert that “we are the soldiers of the mission declared by the Prophet”.

Abu Mohammad al-Maqdisi, the jihadi theorist who was the spiritual mentor of Abu Mussab al-Zarqawi, the Jordanian leader of al Qaeda in Iraq killed by an American air strike in 2006, says that before it took over swathes of Syria and Iraq, IS wiped out almost all other Islamist and Sunni rivals.

It gave them the choice of death or repentance, and declared war on its al Qaeda-allied rival in Syria, the Nusra Front.

“They now consider the Nusra Front apostates,” Maqdisi says in an online publication. “Abu Bakr (al-Baghdadi) is Iraqi, has a popular base in Iraq (and) he has Iraqi tribes with allegiance to him, while Abu Mussab (Zarqawi) was Jordanian and surrounded by foreign fighters.”

“They are winning militarily because they are depending on former Baathist officers who know their ground”, Maqdisi says. But in the end they rely on fear.

Abu Qatada al-Filistini, another al Qaeda-linked ideologue who with Maqdisi has signed a fatwa declaring it legitimate to fight IS, says “this state is advancing because of the military, security and intelligence background of its leadership

which seeks to impose a state of terror”.

“They impose their authority, with blood, with the sword.”

The former al Qaeda godfathers – Maqdisi who had ties to Ayman al-Zawahiri, Osama bin Laden’s successor, and Abu Qatada, deported from London to face terror charges in Jordan after a long court battle – see differences and similarities between IS and al Qaeda, the movement Baghdadi has now eclipsed.

Unlike al Qaeda, which only established a tenuous ‘emirate’ under the U.S. occupation before it was driven out of Anbar province, Islamic State is putting down roots. But Abu Qatada argues that it may contain the seeds of its own destruction.

“They are Baathist in the dictatorial and security sense,” he says in an online publication. “Their conflict with other Islamist groups including Nusra is bigger than their conflict with Hashd al-Shaabi,” Iraq’s Shi’ite militia coalition.

In his speech released on May 14 after unconfirmed reports he had been badly wounded in a U.S. air strike, Baghdadi says: “Islam was never for a day the religion of peace; Islam is the religion of war.”

His followers’ assaults on the Shi’ites and their allies in Iraq will “make the Crusaders bleed and strengthen the pillars of the Caliphate”, and defeat Syrian Alawites and the Shi’ite Houthis in Yemen.

While this may sound like empty bombast to outsiders, for Baghdadi’s audience the point is that the Sunni army of IS has often succeeded in kicking Shi’ites out of Sunni cities. Yet the very success of IS suggests limits to its expansion.

The movement has gained footholds in ungoverned spaces such as Libya and the Sinai – and in territory from Nigeria to the Caucasus.

It is also adept at exploiting sectarian opportunities: the recent bombings of Shi’ite mosques in Saudi Arabia are an attempt to widen rifts between the kingdom’s Sunni majority and a marginalised Shi’ite minority.

But in the core of the caliphate, gains have so far been confined to Sunni areas. Attempts to break into Kurdish or Shi’ite territory have been beaten back.

Yet, IS is well implanted in its Syrian and Iraqi domains until the Sunnis can be persuaded to uproot them. That will not happen while they fear oppression from Baghdad and Damascus more than the brutality of the caliphate.

Maqdisi explains it by citing an Arabic proverb: “What made you accept this bitter cup, except that more bitter one?”

IS ruthlessness is methodical. Taught by their Baathist commanders, they are a fast and flexible military force. But by the time they move on a Sunni city IS will mostly have cleansed it of opponents who refuse to recant, and wiped out Islamist rivals.

They are also quick to seize local resources

, from energy to bakeries and taxation, both to finance their operations and make themselves the source of patronage and jobs.

They have grown rich from selling oil, trading hostages and selling smuggled antiquities, says Hisham al-Hashemi, an Iraqi researcher on IS. The group’s wealth is estimated at $8-9 billion, Hashemi says.

They have some administrative stability: behind Baghdadi lies a leadership of depth and structure and Baghdadi could easily be replaced.

“If Baghdadi is killed, there will be another,” says Abu Qatada. “Those who come out of the darkness or shadows are many.”

Baghdadi, who has a PhD from the Islamic University of Baghdad on Islamic history, has an advisory council of nine members and about 23 emirs in charge of Sunni areas. They run their own ministries.

Underneath all this is a detailed governance structure that from Nineveh, the province of which Mosul is the capital, to the cities of Anbar is mostly run by ex-Baathist army officers who were nearly all U.S. prisoners in Bucca jail, which became a sort of IS university.

Those who have ties with Islamic State say Baghdadi is not the most powerful figure. Second-in-command Abu Ali al-Anbari, a general under Saddam, wields real power. Another key figure was Abu Muslim al-Turkmani, a former military intelligence colonel reportedly killed in an air strike in 2014. Both were with Baghdadi in Bucca.

“Having former Baathist officers in the leadership gave him a military and security advantage,” says Hashemi. “They can encourage recruitment among their tribes and most of them belong to big Iraqi tribes.”

On the ground, a year of air strikes by the U.S.-led coalition has hurt IS but has so far failed to dismantle Baghdadi’s caliphate, which remains a major threat.

“They have lost people, they have lost ground and part of their capacity to sell oil. But they are still there and dangerous,” said the Iraq-based diplomat.