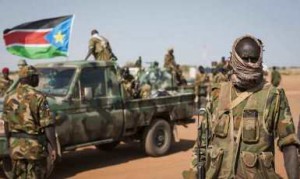 Colonel Nyarji Roman, the deputy spokesperson in the office of the SPLM-IO chairman told Sudan Tribune there was a heavy fighting between government forces and opposition forces loyal to Riek Machar in Lanyi and Mundri areas Sunday.

Nyarji said he had received a report from the ground that government forces left their base in Lanyi and entered towards the SPLM-IO site where the fighting took place.

The field commander of the SPLM-lO forces in Mundri East said his forces managed to counter government forces in self-defense, from entering the cantonment site and they pursued them up to their camp before he ordered his forces to withdraw.

“On arriving to their camp in Lanyi the government started bombing towards our forces with very unique weapon which has led our forces to go blind and started vomiting seriously”, said the SPLM-IO force commander.

“About forty of our forces went blind in a second due to the effect of what we suspected to be a chemical weapon fired on us,” he added. “But we are able to salvage them very fast by moving them to the site and give them salt”.

The two warring SPLM factions in August last year signed a final peace agreement to end the over two-year old conflict in South Sudan. However, clashes between the two rivals have since then continued in various parts of the country.

The opposition official accused president Salva Kiir government of continuing to deploy its forces in all villages in Greater Mundri contrary to the agreement.

He alleged that government forces were deployed in Tapari, Jambo, Buagyi, Lanyi, and Lui in Mundri East and Okari, Kotobi, Adango, Karika and Langowa in Mundri West County.

“The presence of those forces in the said locations were very destructive to the local population as they were, burning houses, arresting youths, rapping women and killing civilians” added Nyarji Roman.

According to him, few weeks ago, in Lanyi – Mundri East, three women were kidnapped by the (SPLA- Juba) Soldiers; the women kidnapped were still under the custody as SPLA (Juba) Soldiers in their camp in Lanyi till now.

“The conditions in which many of our people are now living in Mundri are a negative of human dignity and a disgrace to the twentieth century World”, said a mother of two, who preferred anonymity.

She added “But we believed in the facts that our real security and freedom does not depend on the pressures and negativities of the government forces in our area, but it depends on the unity of the people of South Sudan and on our united discretion’’.

The Mundri resident described the situation in the area as very frightening and requires the special attention from the regional bloc (IGAD) and the international communities.

The two South Sudan warring factions were supposed to form a transitional government by January 22, a deadline set by the Joint Monitoring and Evaluation Commission (JMEC) however failed to meet the dead line.

However Ban said it was regrettable for the partners to miss the deadline to form the transitional government of national Unity.

Ban urged the two warring factions to let the people of South Sudan enjoy the fruits of independence.