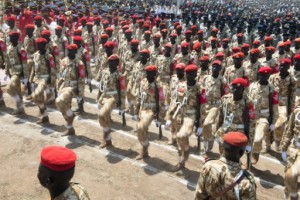 South Sudan’s army and rebel forces have agreed to deploy joint military units in the capital, a key stage of a peace deal aimed to end nearly two years of war.

Both sides have repeatedly traded blame for breaking an August 26 peace deal, the eighth such agreement.

Despite continued fighting, the rivals signed a deal in neighbouring Ethiopia to fix key military sections of the deal, including how many troops each side will have in the capital Juba.

A total of 4,830 troops will be allowed inside Juba. Just over two-thirds of those, or 3,420 men, will come from the government, while the remaining 1,410 will be from the rebels, according to the terms of the deal.

Those forces will include joint guard, military police and national security service units.

The demilitarisation of government-held Juba to allow the return of rebel chief Riek Machar and his entourage is a key provision of the peace agreement.

The deal, signed Tuesday, was witnessed by chief mediator Seyoum Mesfin from the regional IGAD bloc.

The rivals also agreed to deploy joint police units in Juba — with 3,000 in the capital, split equally between the two sides — as well as an 800-strong force in each of the key cities of Bentiu, Malakal and Bor.

Those three cities have been left in ruins after swapping hands repeatedly during the war.

There was no clear time frame for when the troop deployment would take place, and the two sides are already far behind a string of deadlines set up by the August deal.

Civil war broke out in December 2013 when President Salva Kiir accused his former deputy Riek Machar of planning a coup, setting off a cycle of retaliatory killings that has split the poverty-stricken, landlocked country along ethnic lines.

Tens of thousands have been killed, and UN-backed experts have warned of the “concrete risk of famine” before the end of the year, if fighting continues and aid does not reach the hardest-hit areas.

Both sides are accused of having perpetrated ethnic massacres, recruited and killed children and carried out widespread rape, torture and forced displacement of populations to “cleanse” areas of their opponents.