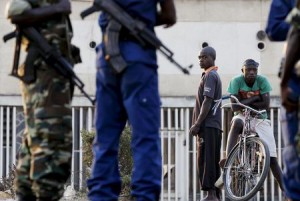 A Rwandan man who had been accused of recruiting for the Islamic State was shot and killed in the capital Kigali while attempting to escape police custody, police said in a statement on Monday.

Muhammad Mugemangango, a deputy imam at Kimironko Mosque in Kigali, was under investigations for encouraging Rwandan youth to join the Islamic State, which is fighting in Iraq and Syria. No charges had been brought.

“He jumped off the vehicle, whereupon he was shot so he (would not) escape but died in the process,” police said in a statement about the Sunday evening incident.

Most Rwandans are Christian. Muslims account for about 2.5 percent of population.

After news of Mugemangango’s death broke, the country’s main Muslim association, Rwanda Muslims, said it planned to circulate messages condemning radicalisation to all of Rwanda’s mosques.

The group said it was aware that five Rwandan Muslims had gone missing after travelling to the south of the country to preach to university students. It was not immediately clear if there was any connection between the two cases.

A representative of Mugemangango could not immediately be reached for comment.