You are here: Home / Africa / Rwanda: Kigali kicks 70,000 Burundi refugees out over security 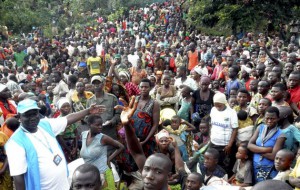 Rwanda said it would expel 70,000 Burundian refugees, two days after US diplomats accused it of destabilising its southern neighbour.

“The long-term presence of refugees so close to their country of origin carries considerable risks for all involved,” the Rwandan government said.

Over 200,000 refugees have fled Burundi since a brutal crackdown in April on protests against President Pierre Nkurunziza seeking a controversial third term. Over 400 people have been killed.

“The growing risks to our national security from the Burundian impasse and misunderstandings in our foreign relations are unacceptable,” said Rwandan Foreign Minister Louise Mushikiwabo.

Rwanda’s decision follows US diplomats saying that they had received reports that Kigali had been training refugees to overthrow Mr Nkurunziza.

A UN report based on interviews with fighters and leaked two weeks ago made similar claims.

On Thursday, the French and British UN ambassadors said Burundi must be kept in the spotlight, with more political dialogue and international involvement — potentially including peacekeepers.

A recent African Union summit shelved a plan for 5,000 peacekeepers after the Burundian government said it would treat them as invaders.

Government forces have been accused of extrajudicial killings, rape and torture, with the UN peacekeeping force in the Central African Republic sending home three Burundian soldiers for alleged human rights abuses in their own country.

Armed opponents have staged attacks on troops, including a deadly barracks raid in Bujumbura in December that led to reprisals across the capital.