You are here: Home / MidEastGulf / Russia’s ‘revenge’ after Nagorno-Karabakh: reprisals in Syria for Turkey’s support of Azerbaijan 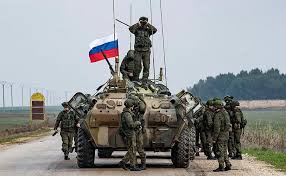 The Russian military has been very active in Syria over the last few weeks. It has been conducting air and ballistic-missile strikes against Turkish-backed militant groups around Idlib. This activity can be seen as more fall-out from the recent conflict between Azerbaijan and Armenia over the enclave of Nagorno-Karabakh, an area claimed and occupied by Armenia since 1994 but, under international law, part of Azerbaijan, like reported by defenceindepth.co.

This conflict began on 27 September and ended with a Russian-brokered ceasefire on 10 November after Azerbaijan had made significant territorial gains. And although Moscow might itself be seen to have made net gains from the conflict (see below) the interference in it – if not its actual instigation – by Turkey has caused deep Russian concern. Moscow regards the South Caucasus as its ‘back yard’ (part of its ‘near abroad’) and foreign interlopers such as Turkey are not welcome. As such, Ankara’s involvement was bound to bring some sort of Russian reprisal action against Turkish interests beyond the South Caucasus. This has been referred to as a need for ‘revenge’ (mest’) in some Russian sources.

This revenge has been evident in Syria and may yet also come in Libya (where Moscow and Ankara also have competing interests). This does not bode well for geo-political stability in the Caucasus, the Black Sea region and, indeed, the eastern Mediterranean. For while Moscow and Ankara do have many reasons to maintain cordial relations (notably economic) the various points of tension between them may ultimately lead to serious clashes. This brief article, using predominantly Russian sources and seeking to gain a Russian perspective, examines the current state-of-play now in the South Caucasus, in Syria and in regard to the overall relationship between Russia and Turkey.

In Russian eyes, Azerbaijan’s success in the conflict can be put down purely to the military assistance Turkey supplied to its close neighbour and ally; both countries having ethnic, linguistic and cultural links and, as has been pointed out in Russia, a ‘common enemy‘ – Armenia. This assistance has been long-standing, but it has increased in degree in recent years and Azerbaijan’s military has come to be considerably revamped through Turkish help. During the conflict around Nagorno-Karabakh, Azeri advances – designed to regain land lost to Armenia in the war between them ending in 1994 – were aided in large part by, according to Russian sources, the command-and-control capabilities provided by the Turkish military and the use of various Turkish weapons systems. Notable here were strikes by Bayraktar TB2 UCAVs, which destroyed numerous Armenian armoured vehicles. Particularly effective also were the Israeli-made and highly sophisticated Harpy and Harop loitering munitions.

But perhaps the true game-changer in the conflict might be seen to be the introduction by Turkey into the fray of at least 2,000 Islamist militants from Turkish-controlled Syria. These came, according to Russian sources, from the Sultan Murad Division, the Hamza Brigade and the Faylaq al-Sham group. The head of Russia’s foreign intelligence service (the SVR), Sergei Naryshkin, even said that Jabhat al-Nusra (formerly al Qaeda) also had a presence in the region and he voiced concern that the ‘South Caucasus may turn into a stronghold of international terrorists’ that could threaten Russia itself. Some of these Syrian fighters that Turkey had transferred to Nagorno-Karabakh had actually come from Libya. They had been there acting in support of Ankara’s ally, the UN-recognised government based in Tripoli and against the Russian-backed rebel administration based in Benghazi. It is important to note that many of these Syrian Islamists had been sent to Nagorno-Karabakh just days before the conflict began. Their movement was part of general Turkish preparation for the conflict.

Given that the conflict was (on one level) between, essentially, Christian Armenia and Muslim Azerbaijan, the motivation of these Syrian Islamists to fight and to bolster Azeri advances seems clear. These Syrians, moreover, appear have been very much at the sharp end of the fighting and, according to Russian reports, had quite a high casualty rate. Some 143 were dead by as early as mid-October. It was the approach of these militants to Stepanakert, Nagorno-Karabakh’s ‘capital’, in early November that seems to have motivated Moscow to step in diplomatically and to broker the ceasefire of 10 November.

From Russia’s point of view this whole clash over Nagorno-Karabakh was most unwelcome and put Moscow in a quandary. Moscow wanted to help a long-term regional ‘ally’, Armenia, but without offending a regional ‘partner’, Azerbaijan (to whom Moscow has made significant sales of arms recently). Historically, Moscow has tried not to take sides between these two protagonists (who both became independent after the end of the Soviet Union in 1991). It has also suited Russian interests, since the 1993-94 war between them over Nagorno-Karabakh, to keep the conflict between them ‘frozen’. Such ‘frozen conflicts’ on Russia’s peripheries (in the likes also of Ukraine, South Ossetia, Abkhazia and Transnistria) suit Moscow’s purposes. The disputes over territories between the competing factions tend to leave all of them looking to Moscow as the arbiter of final outcomes, thus providing it with a considerable degree of regional leverage as a power broker. More fundamentally, perhaps, maintaining frozen conflicts means that neither side involved in them can join NATO – the Alliance only accepting new members who have no territorial disputes. This naturally serves Russian interests given that NATO expansion into states on Russia’s periphery is a major Kremlin concern. As one Russian source put it in regard to the current dispute in Nagorno-Karabakh (or Artsakh in Armenian), and explaining the fundamental issue for Moscow: ‘If Artsakh remains Armenian, it will prevent Azerbaijan from joining the North Atlantic Alliance’. Hence, any resolution today by Azeri force of the frozen conflict of Nagorno-Karabakh is certainly not welcome in Kremlin corridors. Russia thus had to step in by early November given the danger then of the Azeri occupation of Stepanakert and the total collapse of the enclave.

On this point, it is also important to remember that, from the Russian perspective, Turkey has not been acting on its own in the South Caucasus. That is, as a member of NATO it is seen (however improbably) as doing NATO’s bidding in the region. The Russian media likes to make the point that Turkey is a NATO member and that Turkish influence in Azerbaijan equates to NATO influence there as well. As one Russian news outlet graphically expressed it, ‘it is important for Russia to preserve Nagorno-Karabakh, otherwise NATO will easily get access to the Caspian Sea.’

Linked to this concern about NATO interference is Moscow’s stance towards Armenia. Russia has always been a strong ally of the Armenians (notably, of course, because they are fellow Orthodox Christians). There are several thousand Russian troops based in Armenia proper (but never any in Nagorno-Karabakh itself because it was legally Azeri territory). In recent years, however, Moscow has become concerned that, under Prime Minister Nikol Pashinyan, Armenia has adopted an ‘overly pro-Western course’. Given Pashinyan’s stance, it seems that Moscow was quite content for Armenia to face some sort of ‘defeat’ in the recent conflict so that Pashinyan, who would naturally be blamed by the Armenian people for such defeats, would be faced by domestic unrest. This he duly came to face. With his position thus undermined, he is now having to look to Moscow – and not to the West – for help in keeping him in power. So, from Moscow’s point of view, the outcome of the war is desirable – the borders of Armenia proper remain secure but Yerevan has lost territory around Nagorno-Karabakh but without, crucially, losing the whole of the region. Moreover, if the whole of the enclave had been lost to Azeri control then Putin would himself have had to face the ire of his own Russian people for allowing co-religionists to suffer a major defeat imposed, not just by a Muslim state entity, but also by one who had employed Islamist ‘terrorists’.

Hence, Russian military deployments to the south Caucasus during the conflict were only of air-defence units sent to bolster those of Armenia proper and to protect the thousands of Russian troops based there. To maintain neutrality, Russian forces did nothing to assist Armenian troops around Nagorno-Karabakh.

Thus with the ceasefire now imposed, the situation has worked to Russia’s advantage. Not only has Armenia, in essence, been brought to heel, but Moscow has also more influence over Azerbaijan. As part of the ceasefire agreement, there are now 2,000 Russian peacekeeping troops (from the Ulyanovsk-based 15th Separate Motorised Infantry Bde) on the ground in Nagorno-Karabakh. Their presence has fundamentally increased Moscow’s degree of regional influence and means that it can keep now the conflict frozen with a greater degree of certainty. It also means that Russia now has a military presence in every single frozen conflict in its near abroad. And Russia, moreover, will keep any Turkish peacekeepers out of Nagorno-Karabakh despite Ankara’s wish to see them there. Any Turkish troops that do come to the region will have to remain on the (undisputed) territory of Azerbaijan itself and will have to monitor events actually in Nagorno-Karabakh using drones.

For its post-conflict position to be truly cemented, though, Moscow has to give Ankara a sense that it has crossed a red line with its involvement in the south Caucasus. This brings us back to the ‘revenge’ taken by Russia in Syria. In recent months, and prior to the Nagorno-Karabakh conflict, the Russian and Turkish forces based in northern Syria have basically been in a tense stand-off situation. In a nutshell, and with the danger of oversimplification, Turkey supports several Islamist factions in the region while Russia is very much opposed to them. In recent years, Russia has periodically conducted air strikes against Islamist camps and even killed 33 Turkish soldiers in an attack on a convoy in February of this year.

Once the Nagorno-Karabakh conflict started in late September, though, Russian attacks on the various Turkish-backed militant groups in Syria increased in intensity and number. Indeed, these groups themselves could see the writing on the wall and were actually expecting reprisal attacks against them. As one representative of the Islamist factions put it in early October, such Russian attacks would be necessary in order to indicate the ‘Kremlin’s desire to rein in Ankara in the Nagorno-Karabakh region’. A number of high-casualty strikes were registered. In late October, for instance, Russian aircraft killed about 80 militants from the Al Sham Corps. Such attacks have clearly put Turkish forces in Syria on the back foot. On 11 November (the day after the ceasefire in Nagorno-Karabakh) it seems clear that the Russian military had warned Turkish units that they were about to conduct another attack. On this day, a large withdrawal of Turkish forces was noted (hailed as a ‘retreat’ (otstuplenie) by Russian sources) from positions where they could be seen as protecting Islamist groups. And by 13 November it was clear why they might be pulling back as not only Russian airstrikes took place but also the rare use of the Iskander-M ballistic missile. The use of this particular missile would certainly be signalling a sense of Russian ire to Ankara.

With its ‘revenge’ air and missile strikes in Syria, Russia seems certainly to be firing some warning shots across Turkey’s bows. Moscow’s needs to rein in Ankara’s ambitions and to stop it spreading its influence any further in the South Caucasus. The message seems to be that there will be costs attached to any such encroachment. And while Moscow certainly did not welcome the outbreak of the conflict in Nagorno-Karabakh, the outcome actually seems generally to be in its favour. But what Russia now has to do is to prevent any further build-up of Turkish forces within Azerbaijan. This might prove quite difficult given Ankara’s obvious wish to become far more of an influence in the South Caucasus.