You are here: Home / MidEastGulf / Russia’s Putin says no one but Assad’s forces and Kurds are fighting Islamic State 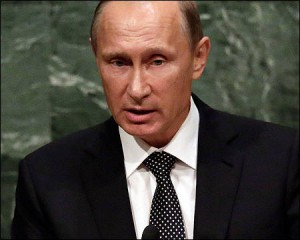 Speaking after his meeting with U.S. president Barack Obama on Monday, Russian president Vladimir Putin told reporters Russia was pondering what more it could do to support Syrian government and Kurdish forces against Islamic State militants.

“We should finally acknowledge that no one but President Assad’s armed forces and (Kurdish) militia are truly fighting the Islamic State and other terrorist organizations in Syria,” Putin said.

“We are mulling over what we would really do extra in order to support those who are in the battlefield, resisting and fighting with terrorists, ISIS (Islamic State) first of all,” Putin said, ruling out deploying Russian ground troops.

“There is (an) opportunity to work on joint problems together,” Putin said of his talks with Obama, which a U.S. official described as “businesslike.”

Russia and the United States agreed on Monday to look for a diplomatic end to the Syrian civil war but clashed over the central question of whether Syrian President Bashar al-Assad should retain power.

During a 90-minute meeting, Obama and Putin agreed that their armed forces should hold talks to avoid coming into conflict in Syria after a Russian military buildup there over the last several weeks.