You are here: Home / Senza categoria / Russia’s plan for peace in Syria making rounds at UN 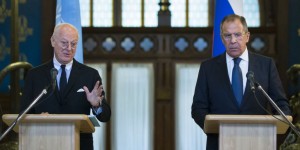 A Russian document making its rounds at the United Nations has proposed a constitutional reform process in Syria, which would be set to last 18 months and be followed by presidential elections.
The document does not say whether Syrian President Bashar al-Assad should remain in power during that time.
It says certain Syrian opposition groups should take part in key talks on the crisis in Vienna on Saturday.
The Syrian army meanwhile is reported to have broken a siege in the north.
Army units had made contact with troops defending Kuwairis airbase, east of Aleppo, and eliminated large numbers of Islamic State (IS) militants, the Sana news agency said.
The facility had been under attack by IS jihadists for nearly two years.
A Russian foreign ministry spokeswoman said that the priority ahead of next Saturday’s meeting should be to establish which Syrian opposition groups are to be regarded as partners in the process, and which are “terrorist” and unacceptable.
The eight-point proposal drawn up by Russia is reported not to rule out President Bashar al-Assad’s participation in the elections – something his enemies say is impossible if there is to be peace.
“[The] popularly elected president of Syria will have the functions of commander-in-chief of the armed forces, control of special services and foreign policy,” the document is quoted by Reuters as saying.
It says that the reform process should not be chaired by President Assad, but by a candidate agreed upon by all sides.
It also calls for UN Special Envoy Staffan de Mistura to launch a political process between the Syrian government and “a united delegation of opposition groups” on the basis of the June 2012 agreement between major powers in Geneva, which calls for the formation of a transitional government for Syria.
De Mistura on Tuesday urged world powers to build on the “momentum” of new international talks to help devise a roadmap to end the four-year war.
“The momentum in Vienna needs to not be missed,” he told reporters after briefing the UN Security Council.
About 20 countries and international groups will attend the talks which have as its central objective a ceasefire between President Assad’s forces and some opposition groups.
www.sigmalive.com