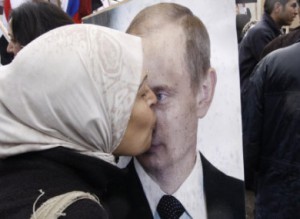 It is Russia’s version of shock and awe: a slick, 21st century media campaign in which briefings, high-tech graphics — even weather reports — tout Vladimir Putin’s Syria attack plan and its claims of success.

The publicity blitz is on a scale never before witnessed in a Russian conflict; from edited clips of airstrikes to live news from the Syrian runways — the sheer number of camera angles is a revelation for Russia’s normally secretive military.

Across state media — the only news outlets that really matter here — millions of Russians are treated to a succession of live reports, analysis, and official defence briefings (closed to the foreign press) delivering a seemingly coordinated message: that airstrikes in Syria are crucial in the fight against ISIS.

And regardless of just how successful the strikes themselves have been so far, the campaign at home appears to be winning.

Just a few days before the offensive began, the Levada Center, an independent pollster, found the Russian public was deeply sceptical about the possibility of strikes, with support for military intervention in Syria as low as 14%.

The idea of Russia being sucked into its first war outside the former Soviet Union since the invasion of Afghanistan in 1979 filled many Russians with apprehension.

But a dramatic week of airstrikes — backed by a propaganda campaign — appears to have turned opinions around, and the public is now squarely behind the military move; according to the latest Levada opinion poll, 72% of Russians are now in favour of it, with only 14% opposing the incursion.

According to Dmitry Nekrasov, a media analyst and frequent chat show guest in Moscow, the state propaganda has worked brilliantly.

“Not a lot of people actually really support sending our troops to Syria, because everyone understands there could be victims,” he told me this week.

“But everyone, or the majority, like this demonstration of force — these planes and so on — of Russian power,” he added.

It’s a message of power backed up by daily Defence Ministry videos of the conflict zone, and briefings designed to talk up Russia’s military prowess.

According to the Kremlin’s spin doctors, even the elements are on Russia’s side when it comes to its campaign against what the government insists is “ISIS, and other terrorist groups.”

“From the point of view of weather conditions, October in Syria is a generally advantageous time for airstrikes,” one meteorologist informed viewers this week, in a clip that has since gone viral on social media.

But what’s most interesting are the insights this new media strategy offers into what is really driving the Kremlin.

Certainly, attention is being drawn to Russia’s military muscle. The country’s most advanced weaponry looks great in action.

And Vladimir Putin can be portrayed, once again, as a hero who stands up to the West.

But critics say this blanket coverage of Syria may also be a useful distraction.

Already, enthusiasm for Russia’s other war, in Ukraine, appears to have dimmed. Euphoria over the annexation of Crimea last year is now hardly mentioned in the media.

And with the country’s economy withering under the impact of sanctions and low oil prices, the Kremlin may be gambling that Syria can provide a spectacular boost to Russia’s national pride.