You are here: Home / Europe / Russians in Syria 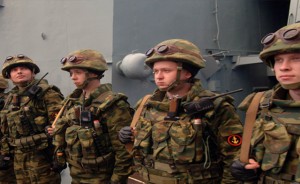 As Europe struggles to contain the tide of Syrian refugees, more bad news is flowing from Syria, threatening to aggravate the crisis.

As millions of Syrians flee death, destruction and poverty, President Bashar Al Assad is devising new ways to consolidate his hold on power. His allies — Iran, Hezbollah and Russia — have been stubborn in their support to the beleaguered leader. Of the three, it’s reported that Iran and Hezbollah have their troops on the ground in Syria, fighting along with the Syrian forces, and it has emerged now that Russia too has its military in Syria. Reports on Friday quoted US officials as describing an increase in Russian military activity in Syria, expanding Moscow’s support for Assad amid the grinding civil war. As US Secretary of state John Kerry rightly pointed out, if accurate, the Russian action would further complicate the refugee crisis. It would escalate the conflict, lead to more murders of innocent people and risk confrontation with the Islamic State. Kerry has conveyed his concerns over Moscow’s action to his counterpart Sergei Lavrov, but that is unlikely to change the situation on the ground.

The Syrian crisis could have been averted or mitigated if the world had acted in time. There was a flurry of activity at the beginning of the civil war with Arab leaders trying to help the rebels in Syria, but those initiatives died in the absence of adequate support from the West which was against arming rebels due to fears of these arms falling in wrong hands. Since then, Assad has been on a killing spree, and the entry of IS complicated the crisis. While Assad’s friends stood by him against all adversities, the Arab and other allies of the opposition disintegrated.

The Russian intervention will strengthen Assad’s hands immensely and should therefore galvanise the anti-Assad forces into action. According to a New York Times report, Russia has dispatched a military advance team to Syria and has sent prefabricated housing units for hundreds of people to a Syrian airfield and delivered a portable air traffic control station there. Experts say the temporary housing shows Russia could deploy up to 1,000 advisers or other military personnel to the airfield that serves Latakia, Syria’s principal port city that is near the Assad family’s ancestral home. There are no indications Russia intends to deploy significant ground forces, but according to experts, they could be preparing the airfield as a base for transporting military supplies or a launching pad for air strikes supporting Assad.