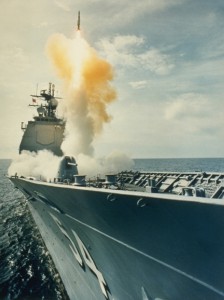 “Besides using aviation to destroy militants, this morning ships from the Caspian Flotilla were brought in, four destroyers launched 26 cruise missiles at 11 targets from the Kalibr Marine Base,” Shoigu told Putin in a meeting televised by Rossiya-1.

All targets were destroyed, Shoigu said.