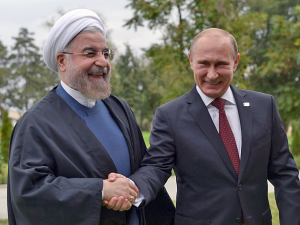 Two Russian warships docked in northern Iran to participate in a series of naval training exercises.

The two Russian vessels — Volgodonsk and Makhachkala — with nearly 130 personnel on board arrived at the port of Anzali in the Caspian Sea on Sunday afternoon. The warships will hold “joint naval exercises with the Iranian navy during the three-day stay in Iran,” according to a report by the state-run Fars News Agency.

The Russian warships docked in Iran “carrying a message of ‘peace and friendship,’” Fars quoted Iranian officials as saying, adding that the fleet was “welcomed by Iranian naval commanders and staff.”

This is the third trip by a Russian fleet to Anzali. The first two trips were made in 2007 and 2014, Iran’s Press TV reported, adding that Iranian forces are also expected to pay a visit to Russia in mid-October.

“The maritime relations between Russia and Iran will be expanded and we will go ahead with our official and unofficial visits to Iran,” Press TV quoted Capt. Kirill Taranenko, the commander of the Russian fleet, as saying.

The naval exercises come only weeks after Iran and Western powers agreed to a deal that would lift economic sanctions imposed on the Middle Eastern nation in exchange for restrictions on the country’s nuclear program.

The ties between Russia and Iran have reportedly grown in recent years, with officials from each country regularly visiting one another to sign arms deals and other defense-related agreements.

Qassem Soleimani, the chief of Iran’s elite military Quds Force, met senior Russian officials in Moscow last week, despite being subject to a travel ban by the U.N. Security Council since 2007, Reuters reported.

Iranian Deputy Foreign Minister Abbas Aragchi said last month that Iran will receive the S-300 missile defense system from Russia, despite agreeing to the controversial nuclear deal with U.S.-led negotiators. According to Aragchi, purchasing the S-300 missiles does not come under the purview of the recently adopted United Nations Security Council resolution.

Last week, a senior Iranian naval commander reportedly warned the U.S. against taking military action that might harm Iranian interests. The official claimed that Iran is ready to give an “unpredictably strong” response to any U.S. move.

“The Americans and our enemies cannot stand up against the Islamic system’s deterrence power no matter how hard they try,” Fars quoted Iranian navy commander Rear Admiral Ali Fadavi as saying.