You are here: Home / Mediterranean / Russian warships depart Tartus ahead of strikes on Syria

Satellite images reveal almost all of Moscow’s vessels are gone from Tartus port, in likely preparation for potential military confrontation 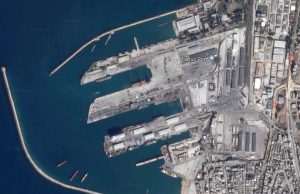 Newly released satellite imagery appears shows that almost all warships at the Russian naval base in Tartus, Syria have put to sea in advance of a preannounced U.S. strike on Syrian positions. Russia holds a 74-year lease on the base under a defense agreement with the Syrian government.

Photos and analysis provided by satellite imaging and intelligence firm ISI showed that on Wednesday, most of the Russian vessels ordinarily present at Tartus were gone, with just one kilo-class submarine left at the pier. On an ordinary day, ISI said, about one dozen Russian naval and merchant vessels could be found at the base.