A Russian warship “has entered the eastern Mediterranean, heading toward two U.S. Navy destroyers that launched airstrikes last night” like reported by breitbart.com 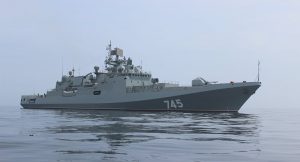 Russia’s TASS news service reported on Friday that a Black Sea frigate was heading into the Mediterranean:

The Russian Black Sea Fleet’s frigate The Admiral Grigorovich, currently on a routine voyage, is to enter the Mediterranean later on Friday, a military-diplomatic source in Moscow told TASS, adding that the ship would make a stop at the logistics base in Syria’s port of Tartus.

“The Russian ship armed with cruise missiles Kalibr will visit the logistics base in Tartus, Syria,” the source said.

The Admiral Grigorovich is currently near the Black Sea straits. It is scheduled to enter the Mediterranean at about 14:00 Moscow time. The ship left on a voyage after replenishing supplies at Novorossiisk and taking part in a joint exercise with Turkish ships in the Black Sea.

The TASS source portrayed this as less of an emergency response and more of a scheduled deployment, saying it is expected to remain off Syria’s shores for “more than a month.”

The 4,000-ton Admiral Grigorovich is one of Russia’s most advanced frigates. According to USNI News, it participated in Russian missile strikes on rebel forces in Aleppo last November. The U.S. military was aware of its impending deployment to the Mediterranean, at least as far back as early March.

Some more details of the Admiral Grigorovich and its capabilities can be found here. Note that it is not certain this is the ship referred to by Fox News, although USNI News seems to think so.