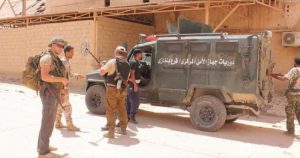 Although they were expected to leave Libya last month, the Wagner mercenaries, estimated at about 2000, continue to operate in eastern and southern Libya backed by fighter planes sent by Russia, like reported by middleeastmonitor.com.

So far, Moscow is unwilling to consider the withdrawal of the forces which support the renegade of General Khalifa Haftar and the possibility of leaving a country that has the largest provable oil reserves in Africa.

The arrival of a delegation of UN observers to the Libyan city of Sirte indicates that UN peacekeepers may be sent to the ceasefire zone between Sirte and Jufra.

On 4 March, the UN mission announced the arrival of a “small advance team to Libya” to set up a ceasefire monitoring mechanism, collect information requested by the UN Security Council and submit a report to the UN Secretary-General, Antonio Guterres. The UN team is composed of ten persons.

Wagner withdrew some of its forces from Sirte and Jufra to adjacent areas following internal and local pressure to appear as though it had pulled out of the region before it became clear that those mercenaries were still tightening their control over the area.

The Russian security company is not just a military company, but rather a tool used by the Russian Defence Ministry as part of a strategy to extend Moscow’s influence worldwide under the guise of “hybrid warfare”.

It is believed the presence of international peacekeepers in Sirte and Jufra will push the Wagner mercenaries to withdraw completely from the region unless Russia resorts to blocking the dispatch of these forces through the UN Security Council.